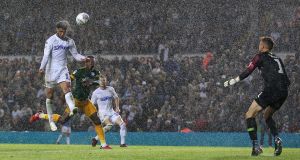 Tyler Roberts scored twice on his home league debut as Leeds beat Preston 3-0 to extend their lead at the top of the Sky Bet Championship.

Wales international Roberts struck his first goals for the club in the space of eight second-half minutes after skipper Liam Cooper had headed Leeds into an interval lead.

A fifth league win of the season extended Leeds’ unbeaten start to eight matches and lifted them three points clear of Brentford, who remain second after being held 1-1 at Ipswich.

West Brom climbed up to third place by halting Bristol City’s four-game winning run with a 4-2 victory at The Hawthorns.

Jay Rodriguez converted a penalty, after Dwight Gayle had been fouled by Adam Webster, and after Gayle had made it 2-0 notched his second to put the Baggies 3-0 up at half-time.

Lloyd Kelly pulled one back for City, but Harvey Barnes fired West Brom’s fourth before Famara Diedhiou notched another consolation for the visitors. Wes Hoolahan made his debut off the bench for the Baggies.

Stoke registered just their second league win of the season thanks to Joe Allen’s goal early in the second period in a 1-0 home win against Swansea.

Aston Villa jumped six places into the final playoff spot after registering their first league win in as many matches, 2-0 at home against Rotherham.

Tammy Abraham’s first goal since arriving on loan from Chelsea put Villa in front at half-time and Yannick Bolasie headed their second on his full debut for the club.

Derby slipped one place to eighth after a goalless home draw against Blackburn after spurning several chances.

Mason Mount went closest for the Rams early in the second period when his free-kick hit the crossbar.

Wigan bounced back from Saturday’s defeat at Brentford by beating Hull 2-1 at the DW Stadium.

Sam Morsy and Josh Windass’s header put the Latics 2-0 up before Jarrod Bowen reduced the deficit before the break.