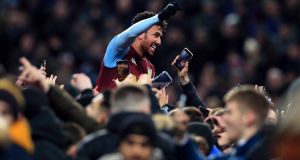 Aston Villa’s Trezeguet celebrates on the pitch after the match at Villa Park. Photograph: PA

Aston Villa reached the final of the Carabao Cup thanks to a wonderful stoppage-time volley by Trézéguet. A rollicking semi-final seemed destined for a penalty shootout after Kelechi Iheanacho cancelled out Matt Targett’s first-half goal for Villa. But Trézéguet, sprung from the bench 12 minutes from time, plundered a dramatic victory to trigger wild celebrations around Villa Park.

An air of giddy anticipation enlivened Villa Park before kickoff, along with a medley of full-throated songs, none of which sounded like backing for Pep Guardiola’s call for this competition to be abolished. Dean Smith and Brendan Rodgers showed their eagerness to book the first slot in the final by sending out strong teams.

Jamie Vardy was only fit enough for a place on the bench but other than that, Leicester were at full strength, and Iheanacho came into the game in such fine form that there would have been a case for starting him up front even if Vardy had been in prime condition. Villa were just pleased to be able to deploy a striker – and not just any one, but their £8.5m new signing Mbwana Samatta.

Some of his teammates made a jittery start, with a couple of defenders guilty of sloppy touches even before Iheanacho outfought Tyrone Mings in the box to claim a bouncing ball in the second minute. The Nigerian then showed good footwork to get off a shot, but the angle was against him, and Orjan Nyland stood strong to save. Nyland had made several fine stops in the first leg so Smith left out Pepe Reina here and gave Nyland a chance to help finish the job he had helped start.

Nyland may have begun to feel over-employed when he was required to make another excellent save in just the fifth minute here, plunging to his left to tip away a low shot by James Maddison after more canny work by Iheanacho.

Things were looking ominous for Villa when Leicester cut through them again two minutes later, but this time Maddison drilled a shot just wide. But before another two minutes had elapsed, Nyland had to dive to the rescue again, foiling Maddison’s latest effort by spreading himself full-length to tip the forward’s shot from 20 yards around the post.

Samatta must have been wondering whether he would get a chance to show what he could do. But then his initiation to life in these parts began in earnest, as he was given a demonstration of the first thing that anyone associated with Villa needs to know: where there is Jack Grealish, there is a way.

After receiving a pass from Douglas Luiz in the Leicester box, Villa’s talisman held off Ricardo Pereira and contrived to bounce a right-footed reverse pass off his left foot and into the path of the overlapping Targett. That was unorthodox, Targett’s finish was textbook. The fullback thrashed a low shot into the far corner of the net, with Kasper Schmeichel beaten before he even knew what has happening.

Now this was an interesting test for Rodgers’ side: they have undoubtedly made big strides this season but they must prove they can take the final step when it matters most. Could they, for instance, come from behind to win a semi-final in rival territory?

They sure tried. The problem was Nyland kept getting in their way. In the 33rd minute Youri Tielemans seemed to have beaten him with a shot from 20 yards that fizzed through the air. But Nyland flew to his left and tipped it on to the crossbar. There were gasps all around the ground: applause did not really ring out until a replay on the big screen confirmed to people in the ground what they had witnessed.

Leicester’s frustration deepened when they were denied a penalty after Marvelous Nakamba inadvertently blocked a shot by Ayoze Pérez with a flailing arm.

Villa, forced to play mainly on the counter-attack in the first period, took the upperhand after the break, with Grealish conjuring almost at will. By 55 minutes, Rodgers had seen enough so threw down his ace. On came Vardy. Within an instant he whizzed past several defenders in the Villa box and offloaded to Iheanacho, whose weak shot was never likely to get past Nyland.

But Grealish could not be suppressed. Soon he delivered two sumptuous crosses that could have yielded goals: the first was brilliantly thwarted by Ben Chilwell; the second was missed from close range by Samatta, who was substituted shortly afterwards. Then, just as the visitors looked to be running low on ideas, Leicester equalised. Barnes burst past Frédéric Guilbert on the left-hand side of the box and sent the ball across the face of goal. Iheanacho arrived at the back post to flick it into the net.

Leicester went in for the kill. But Villa could have struck on another counter-attack in the 82nd minute, only for Trézéguet to scuff his shot. The Egyptian made up for that in spectacular style in stoppage time, when he ghosted in behind Ricardo Pereira to meet a cross from his compatriot Ahmed Elmohamady with a wonderful volley into the bottom corner.

1 Born to ride, born to win: Sam Bennett, the making of a green machine
2 Dreal Deal’s Navan win to be investigated as huge gamble lands
3 Keith Duggan: Surreal story of John Delaney needs to act as a wake-up call for FAI
4 Next stop the Champs-Elysées in green for Sam Bennett
5 Maro Itoje proves he has no peer in the northern hemisphere
Real news has value SUBSCRIBE