Tottenham close in on deal to play home games at Wembley 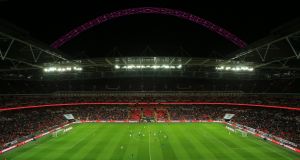 Tottenham look set to be playing home games at Wembley stadium while their new stadium is under construction. Photograph: Getty Images

Tottenham are close to a deal to play home games at Wembley in the 2017-18 season while their new stadium is being built, Football Association chairman Greg Dyke has announced.

Dyke also suggested Spurs could play their Champions League home matches at the national stadium next term, with their qualification for the competition already assured.

Tottenham are building a £400million, 61,000-capacity ground adjacent to their White Hart Lane home. They plan to move into the new stadium at the start of the 2018-19 campaign.

According to Dyke, Wembley is on the verge as being confirmed as Spurs’ base for the season before the move.

Next term’s home Champions League fixtures could also be played there given White Hart Lane’s capacity is likely to be reduced from its current 36,284 to facilitate construction of the new ground.

“We are certainly in discussion with Spurs that they should come in for the full season when they’re rebuilding their stadium,” Dyke told Sky Sports HQ.

“I think we’re a long way down the path on reaching an agreement.

“I think there’s some discussion about whether they’ll play their Champions League games there at Wembley next year but I don’t know much about that.

“On the full season, I think we’re quite close to a deal.”

Dyke also said Chelsea could play home games at Wembley in the near future.

The Blues have plans to redevelop their Stamford Bridge ground, which could leave them needing a temporary home for several seasons.

“I think Chelsea might come for a longer period,” he added.

“Chelsea have got really exciting plans for their stadium. They’re going to demolish the whole thing and build a whole new stadium on the existing site.

“If they came (to Wembley), that would mean them coming for three years.”