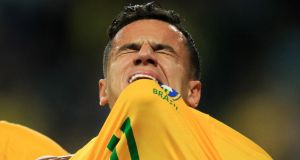 Liverpool’s Philippe Coutinho is one of a number of players who was not in the mindset to play the opening games of the season due to transfer speculation. Photograph: Getty Images

Uefa president Aleksander Ceferin has backed plans by the Premier League to shut the transfer window before the start of next season.

Club bosses will vote this week on a proposal to close the window early, a move which will leave it out of line with the standard Fifa dates.

In an email to the Times, Ceferin said he supported the move to wrap up transfer business before the start of the next domestic campaign.

Ceferin wrote: “I am aware there are serious discussions around Europe regarding the shortening of the summer transfer window and we are following them closely.

“In my view, it is not good when footballers play for one club when the league starts and another club when the transfer window closes. There is a lot of uncertainty for a long time. Therefore I would say that the window might be too long and I would support it being shorter.”

Supporters of the plan are said to be confident of achieving the 14 votes required to force the change, which will likely lead to the Football League following suit.

The League’s chief executive Shaun Harvey also told the Times: “The one thing our member clubs have said is they do want stability in terms of the players that are available to them from the start of the season.

“Shutting the transfer window before the season starts has always found favour with our clubs. It would make sense for the dates to be aligned with the Premier League and any unintended consequences need to be thought through.

“This will be on the agenda for our club meeting on September 21st.”

Gerry Thornley on rugby without fans, Phase One sees courses and courts open again
Here is your handy guide to sport on television this week

1 Sideline Cut: Vignette shows why Bird is the true shark in The Last Dance
2 Seán Óg Ó hAilpín regrets ‘callous’ aftermath of Cork strikes
3 Rory McIlroy now realising the power his words carry as world’s number one
4 Coming fourth in the Olympics didn’t change this fearless quartet, time did
5 O’Leary says himself and Kingdom star Galvin were the best of enemies
Real news has value SUBSCRIBE
Crossword Get access to over 6,000 interactive crosswords