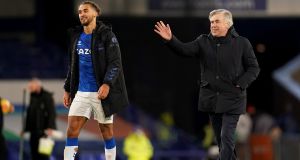 Carlo Ancelotti has said Everton should not be obsessed with ending the longest trophy drought in the club’s history but motivated by the opportunity in the League Cup.

Everton have not won the League Cup in any guise and host Manchester United in Wednesday’s quarter-final seeking to go on and claim the club’s first silverware since 1995.

Rather than feel burdened by history, however, Ancelotti believes his team should be inspired by the challenge of finally delivering a trophy to Goodison Park and by the sharp up-turn in form that has defeated Chelsea, Leicester and Arsenal in the last three games.

“We have the ambition and a great, great motivation for this competition,” the Everton manager said. “There is not a lot of pressure from the fact that this club did not win for a long time. It is not an obsession, it is only a great motivation.

“It is a really important competition because we are not so far from the final; in three games it is finished. We are there, we want to compete for this, we want to fight. The target is to reach the final but to do that we have to do a fantastic game tomorrow against one of the toughest teams in the Premier League who beat us here a few weeks ago.”

Bruno Fernandes orchestrated United’s 3-1 victory when the sides met last month and, while Ole Gunnar Solskjær has spoken of resting the playmaker during this hectic schedule, Ancelotti remains wary of the threat he poses. “I learned that day that if you leave space for him we are dead,” he added. “We have to avoid leaving space because he is a fantastic player and the key point for Manchester United at this moment. We have to take care of this.”

Everton, who will again be without James Rodriguez due to a calf problem, remain one of the few Premier League clubs able to allow 2,000 supporters as Covid-19 restrictions increase across the UK. Ancelotti admits their backing helped during the home wins over Arsenal and Chelsea, but insists the return of fans is more important for society than an obvious sporting advantage.

“The fact you can listen to 2,000 supporters again after we were not able to have noise for six months is really good,” explained the Everton manager. “In the two games we won against strong teams because the players are more focused, more concentrated and more motivated.

“The supporters helped us a lot, but I don’t consider it an advantage that we have fans. I consider only that it is a great start and the most important thing is to have all the fans back in the stadiums.”

Solskjær has said United are desperate to win the League Cup, with the manager stating his players are hungry to learn how to win trophies.

When asked about the importance of claiming a first trophy, Solskjær referenced his playing career at United and his former team-mates Patrice Evra and Nemanja Vidic.

“Yes, of course it’s something we’re aiming for,” the manager said. “I remember myself winning my first trophy [and] even towards the end of my career Patrice Evra and Nemanja Vidic’s first [Manchester United] trophy in the League Cup – 2006. That was their first trophy and it does give something to a team. We are desperate to get our hands on a trophy; these players are desperate to learn how to win.

Several members of the squad – including Marcus Rashford, Paul Pogba and David de Gea – have won trophies with United. Another player to have done so, Jesse Lingard, will be in the squad to face Everton, Solskjær said. The forward has been unavailable at times because of circumstances beyond his control regarding Covid-19. His most recent appearance was in September.

“He’s been working hard in training [having] been unfortunate with having to isolate a few times – been in contact, or close contact, with Covid, not even having it himself,” Solskjær said.

“He’s been very unlucky being away from the training ground a few times. He works really hard and he’ll be involved in the squad, definitely, on Wednesday.”

Mason Greenwood, an unused replacement in the 6-2 win against Leeds on Sunday, should make the trip. “He will be involved in the squad unless something happens in the next couple of days,” Solskjær said. – Guardian

Connacht make seven changes as they seek to extend winning run 06:00
Carbery’s return the major subplot as Munster visit Arms Park 06:00
Ireland will be looking for that clinical edge in Rome, says Farrell 06:00
Jacob Stockdale to be unleashed as Ulster target win over Ospreys 06:00
Six Nations miscellany: Jonathan Davies can provide the glue for Wales 06:00