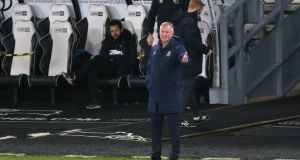 Michael O’Neill: “Our priority has always been the league . . . But it’s a game against Tottenham, of course it’s something to look forward to. Photograph: Nigel French/PA

It is understandable that a Carabao Cup visit from José Mourinho and Tottenham Hotspur sharpens focus on Michael O’Neill’s quiet revival of Stoke City. Perhaps O’Neill will be glad when this quarter-final tie has been resolved, meaning he can return to the pursuit of perfection without prying eyes.

Anyone concerned about O’Neill’s ability to reboot Stoke – a club who, at that November 2019 juncture, were rooted to the foot bottom of the Championship and seemingly in freefall when he took charge last year – needn’t have worried.

The skillset O’Neill applied when so successful with Northern Ireland has transferred seamlessly to the Potteries. Spurs are of course the favourites to prevail on Wednesday evening but Stoke, only outside of the Championship’s play-off positions on goal difference, have made considerable headway.

Not, that is, with O’Neill is seeking plaudits for a job half done.

“When you are in the middle of it, there is always so much frustration as well,” he says. “People from the outside point to the improvement but I always want things to be better all the time. Sometimes you can’t see that they are better because you are focused on a performance that isn’t what you want it to be.

“At the same time, I see a lot of things at the club that are obviously a lot better than when I came in. There is a much more positive atmosphere. We are pushing to be in the top six and the challenge is there to maintain that. Last year, from the minute we walked through the door we were just fire-fighting to stay in the division, which isn’t where Stoke should be. That wasn’t through lack of investment in the team, it was just the club struggled to adapt to the Championship.”

O’Neill inherited a bloated squad and an eye-watering wage bill. Stoke were quite obviously in a rut. The manager says: “When you go into a dressing room with a high number of players, with players who had come out of the Premier League, with players who had been brought in for substantial fees and that group is bottom of the league? The culture is never going to be great. It can’t be. So you have to address that, which is a slow process.

“Having more people out of the team than in it is what really challenges your culture. More players have left than have come in and we put a real focus on the types of people we want, not just what they are as players. We had 31 games in charge last season. Our form over that spell would have had us seventh but we also had to go to the second-last game so secure safety.”

As O’Neill rightly acknowledges, on grounds of finance alone, the longer a team relegated from the Premier League remains in the Championship, the tougher promotion becomes. For Stoke, this is season three.

O’Neill laughs when asked whether the occasionally pragmatic approach of Mourinho –the very term can upset managers – is akin to his own. When in charge of Northern Ireland, O’Neill never had the resources to be expansive.

“You have to do what you have to do to get results,” he says. “People ask me what my ‘philosophy’ would be. That’s not a word I’m particularly comfortable with in terms of football. I just answer: ‘Well, whatever wins games’.

“At times I haven’t had the players and international football is different; you have to play with what you have. Even so far at Stoke, I haven’t come into a club with a blank canvas where I could just say: ‘Right, this is the style of play we want’. Of course you have an idea of what you would like but it takes time. You have to play in a way that best suits the players you have.

“I’ve always admired that José would do what is necessary to win games because that’s basically what the main onus is when you are a coach. We have never met but I’ve admired from a distance. You have to, don’t you? What he has achieved means you have to look at a guy like him in terms of an amazing career.”

“José has always treated this competition with that attitude, whatever club he has been at,” O’Neill says. “I think he always saw it, particularly when coming into a club, as: ‘Well, this is the first trophy you can win in the season, so it merits being taken seriously.’ Given the stage they are at now, we would expect nothing else from them.

“Our priority has always been the league and trying to make sure we can be in the top half, fighting for a top-six position. That hasn’t changed. This had made our schedule very busy, which is challenging now because we have substantial injuries that we didn’t have before. But it’s a game against Tottenham, of course it’s something to look forward to.”

And then, back to a promotion push O’Neill is wise not to cite as actually happening.

“Once you are in top half, you are only ever two or three games away from the top six,” he says.

That alone represents quite a turnaround.