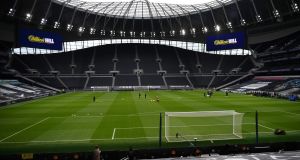 Tottenham’s game against Fulham has been rescheduled for Wednesday. Photograph: Amdy Rain/Getty/AFP

Tottenham will play Fulham, rather than Aston Villa, in the Premier League on Wednesday night with the Cottagers’ subsequent fixture against Chelsea pushed back a day in a complex piece of rescheduling that shows the challenge of continuing elite sport during the third wave of the Covid-19 pandemic.

The Premier League confirmed Aston Villa had requested their match against Spurs be postponed following a substantial coronavirus outbreak at the club. The league accepted that request, then asked Fulham to fulfil the fixture instead. That match up will go ahead, despite Fulham’s misgivings, as will the west London derby with Chelsea, albeit on Saturday rather than Friday.

A chain of dominos was set in motion after Aston Villa were forced to close their Bodymoor Heath training ground last week, when nine first-team players tested positive for Covid-19 before their FA Cup tie against Liverpool. Villa fielded a team of youth and under-23 players for the Cup tie, but felt unable to complete the league fixture this midweek.

Villa’s request to postpone meant Fulham were approached to fill the vacancy. Fulham are believed to feel they received the short straw, having been asked to step up only after they had played their own Cup tie – a 2-0 win over QPR – with a team in which a number of first-team regulars were selected because they were not expecting another match so swiftly. Clubs are able to make representations to the league in the face of such a request, but the ultimate decision is taken by the Premier League board and the game was approved to go ahead.

Chelsea then agreed to delay their match with Fulham to give their west London rivals more time to recover. Rather than being played on Friday night theat game will now take place at 5.30pm on Saturday. Villa’s weekend fixture against Everton has also been put back, from Saturday teatime to Sunday noon.

Fulham have had to close their training ground in recent days and received notification of positive tests within their ranks. Some at the club feel they would not have been asked to play had they been fighting for the title, rather than against relegation, but it would appear that the interests of individual clubs are to be put to be one side as the league concentrates on the more considerable challenge of keeping the competition as a whole on the road.

With the incidence of Covid-19 in the English capital as high as one in every 30 people, the virus is more widespread than at any point since the pandemic reached the country. Last week football’s governing bodies announced a record number of positive tests among players and staff and a tightening of protocols designed to stop the spread of infection.

There have been calls for elite sport to be shut down again as it was in the spring of 2020, or for a ‘circuit breaker’ pause to be introduced. While such a change does not appear imminent, the challenges facing elite football and other sports in keeping going during such difficult times is becoming ever clearer.

Chelsea are set to face Fulham despite having to shut their academy training centre because of a coronavirus outbreak believed to involve as many as 20 cases. Youngsters have been told to stay away while the site undergoes a deep clean after a number of positive tests were returned over the weekend, but first-team facilities remain open.

The academy is housed at Chelsea’s training ground in Cobham but is kept separate from the first team’s site. It will remain shut for the rest of the week, with those who have tested positive isolating for 10 days. The development game against West Ham on Friday and the Under-18 match against Brighton on Saturday will not take place.

Chelsea have ensured that the situation has not impacted their first team. There are separate bubbles for the senior, academy and women’s squads. The Under-23s have been training inside the first-team bubble and have not been affected.

Chelsea are believed to be one of the few Premier League clubs to test their Under-23 players, also going above and beyond the protocols by testing players in lower age-groups. There will be another round of testing before the academy site reopens next week. – Guardian