Manager says side focused ahead of clash at Burnley, where win would make them top 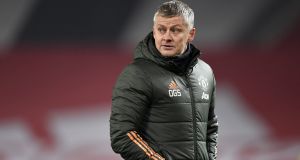 Ole Gunnar Solskjær wants Manchester United to have an “inner justice” which ensures every player adheres to a team ethic and does not allow cliques that can be ruinous to success.

Solskjær takes United to Burnley on Tuesday night knowing a point will take his side above Liverpool as leaders before Sunday’s visit to Anfield. The Norwegian praised United’s togetherness and was asked whether the ideal was for players to manage themselves for the overall good of the side.

“I know what you mean,” he said. “There is nothing worse than having your manager or coaches always telling you what to do – this, that and the other,” he said. “I’ve been lucky enough to have played in a team [United, 1996-2007] with loads of characters, that we looked after ourselves – [had an] inner justice.

“Because then you don’t just let yourself down, you can let your team down. So, you need leaders to really grab hold of the ones who stray out of line and from what we have agreed as a group. When you’re part of a football team there’s nothing stronger than being part of a team that keeps together.

“I’ve also seen teams that have cliques, that don’t work together – that’s the killer of a team. I’ve been lucky enough at Molde [as manager] and here now to have a feeling that I can trust them more and more to look after themselves.”

Solskjær thinks focusing on going top is a red herring. “We need to get points against Burnley before anyone can say you are top of the table,” he said. “I would like to think that we go into this game not thinking about where we will end up [on Tuesday] in the table [after the match] but where we can end up in May. That’s what matters.

“You accumulate the points throughout the season so if at one point you think: ‘Ah we’ve made it now, we have cracked it,’ and you relax, that is when it’s going to hit you back.

“We are very focused. We have some good characters in the team; the dressing room is louder [now], more vocal. We’ve got Nemanja Matic, who has won it [the title, twice with Chelsea] a few times, . . . Juan Mata, Edinson Cavani. Bruno [Fernandes] – he wants to feel part of a team that is going to be challenging for trophies. We have more players that can grab the situation [opportunity].”

While Cavani is available again following suspension, Victor Lindelöf, Luke Shaw, Paul Pogba and Eric Bailly all trained on Monday following respective injury concerns. Pogba and Bailly did not play a full part so Solskjær will decide on their availability for Burnley on Tuesday.