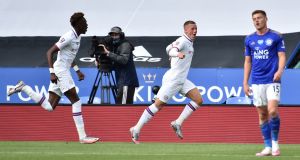 Ross Barkley of Chelsea celebrates after scoring the winner during their FA Cup quarter-final against Leicester City. Photo: Rui Vieira/Pool via Getty Images

Frank Lampard can feel the surge of momentum and his first season in charge of Chelsea is set up for glory. Never mind the priority of delivering a Champions League finish, which looks on after the impressive Premier League victory over Manchester City last Thursday, his team are now into the last four of the FA Cup.

Lampard won the lot as a Chelsea player, including four FA Cups, and how he would love to claim his first piece of silverware as a manager in the final of this competition at Wembley in August.

Ross Barkley fired the possibility with the only goal of an absorbing game after being sent on as a second-half substitute. Chelsea had been poor in the first-half but they were much improved after the interval to keep the feelgood factor at the club bubbling.

Off the field they have invested £89m on Timo Werner and Hakim Ziyech for next season and, on it, they can feel things coming together after the restart of action. Barkley’s finish was a beauty, converted low and first-time from an angle on the right of the penalty area, and it meant more frustration for Brendan Rodgers and Leicester.

They were slick in the first half but could find no reward and, after fading in the second, they know that it is three games without a win since the restart and, more broadly, only two wins in the past ten. The attention will now return to the push for a Champions League finish, which would be an incredible achievement, but they can feel the thunder of the chasing pack, with not only Chelsea but Wolves and Manchester United having closed on them.

Rodgers had mentioned Leicester’s Carabao Cup semi-final loss to Aston Villa before kick-off, how much that defeat in January had hurt and his players began as if affronted by the memory. There was an easy balance in their 4-3-3 system, pace and bite, and Chelsea had to parry a series of early thrusts.

One of the features of post-lockdown summer football are the drinks breaks. It is now a game of four quarters and, although it was debatable whether they were needed on a blustery day at the King Power, Leicester reached the first one in the ascendancy.

They pressed onto the front foot and were routinely first to the ball, most notably when Youri Tielemans stepped up to intercept a pass from Billy Gilmour that was meant for Mason Mount. Tielemans advanced and shot low for the corner; Willy Caballero got down to turn it behind.

Ben Chilwell’s free-kick delivery was a weapon for Leicester. He had picked out the commanding Wilfred Ndidi in the 13th minute only for the midfielder to head straight at Caballero. Ndidi had found space but not as much as Jonny Evans would do on 29 minutes. The centre-half got the run on Antonio Rüdiger to meet Chilwell’s ball only to glance off target. He should have done better.

Chilwell caught the eye in the first half, his speed either up the flank from left-back or on the defensive transitions a problem for Chelsea and Leicester had a couple of flickers up that channel before the break. First, Harvey Barnes got the run of the ball after Rüdiger jumped in on Tielemans only to lash high and later Jamie Vardy dragged well wide after running onto a Barnes pass.

Lampard made six changes to the line-up that had beaten City – Rodgers made four from the draw with Brighton; James Maddison was out with a hip problem – and Chelsea struggled to make any inroads in the first half. However, out of seemingly nothing, they created the clearest chance and only Kasper Schmeichel’s reflexes kept out Christian Pulisic.

All it took was a penetrative pass from Mount in the 31st minute and a slicing run from Pulisic inside the area. The American darted from left to right to blow open a seam of space and his rising drive was struck firmly. Schmeichel was equal to it.

Lampard addressed his right flank at half-time, replacing Reece James and Mount with César Azpilicueta and Barkley while he also swapped Gilmour for Mateo Kovacic on the left of the midfield three. Something needed to be done and Chelsea were more assertive from the restart, occupying higher starting positions and taking the game to Leicester. Now, the aggression belonged to them.

Tammy Abraham had the ball in the net only to be correctly pulled back for offside before Barkley made the difference, stealing in behind Ndidi to sweep in Willian’s centre before Evans could get across. It was Barkley’s fourth goal of the season; all have come in the domestic cups.

Leicester never looked like finding the equaliser to force extra-time, although Caglar Soyuncu headed at Azpilicueta and wide towards the end after a Caballero flap and Ndidi was off target with a first-time sidefoot. Barkley might have added a second only to choose the wrong option after a four-on-two break in the 89th minute and then see Schmeichel save from him when he got the ball back. – Guardian