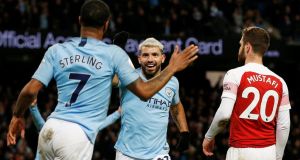 By the time he was done, it was difficult to imagine where Sergio Agüero finds the space to keep all the balls he has collected as souvenirs for his hat-tricks.

He can presumably afford the kind of property where they are all on show, along with enough trophies and other medals to fill an aircraft hangar. But then again, this was the 14th time Agüero has scored three or more in a single game for Manchester City.

Ten of those hat-tricks have come in the Premier League and, if you were to believe that top-division football was invented in 1992, the relevant statistic is that only Alan Shearer, with 11, has more.

Nobody should bet against Agüero from claiming that record for himself and when his latest hat-trick was confirmed – a little fortuitously bearing in mind the ball went in, unconventionally, off his ribs and elbow – perhaps the most remarkable detail was that he had scored 22 times during the last 15 home matches when he has been in City’s starting line-up.

More importantly for City, he had also made the telling contribution on the day Pep Guardiola’s team gave their opponents a harsh reminder about the level of artistry that is required to harbour authentic title aspirations.

For Arsenal, it has been a long time since they held that information for themselves and they have fallen to sixth in the wake of Manchester United’s renascent form.

City, in contrast, have moved within two points of Liverpool and would dearly appreciate a favour from West Ham when the leaders arrive in London to play their game in hand on Monday.

Agüero’s performance, comprising the 217th, 218th and 219th goals of his City career, certainly warranted the ovation that came his way when Guardiola decided to replace him with Gabriel Jesus after the 80-minute mark.

Agüero had scored after only 24 seconds in City’s previous game at Newcastle. This time, the opening goal was timed at 46 seconds and, unlike the game at St James’ Park, there could be no accusations of City playing as though a little bit too pleased with themselves. Or the word that every elite manager despises: complacency.

Arsenal did toy with the idea of making a good fist of it after Laurent Koscielny had surprised everyone, perhaps even Arsenal themselves, by scoring with an 11th-minute header.

Unai Emery’s players seemed convinced that Agüero’s hat-trick goal should have been ruled out. Yet they will know, too, that it might have been an even more emphatic victory for City when the home side had so much of the ball in dangerous areas.

Agüero had restored City’s lead late in the first half and, after the interval, the home side’s display was a reminder that Liverpool will have to play exceptionally well to shake off the reigning champions between now and the end of May. In the second half City managed 13 attempts at goal, Arsenal zero.

The truth, however, is that right from the start City seemed intent on getting that result from Newcastle out of their system. City love to take early control, to worry their opponents from the first whistle, and it resulted here in one of their defenders, Aymeric Laporte, venturing forward to dispossess Alex Iwobi and set up the opening goal. Agüero, alert as ever, was waiting for the cross, twisting his body to score with a stooping header.

For a while, it looked as though Arsenal would be overwhelmed by the sheer ferocity of City’s early blitz. All of which made it surprising, to say the least, when Arsenal emerged from the onslaught to equalise from a corner routine. Lucas Torreira whipped the ball over, Nacho Monreal applied the first touch and Laurent Koscielny had broken away from Raheem Sterling – a strange choice of marker – to turn a close-range header past Ederson.

The corner, the flick-on and the back-post finish – and, for City, the slightly nagging statistic that exactly half of the 20 goals they have conceded in the league so far this season have come from set plays. It is the highest percentage in the top division and something, presumably, that not just Emery will have noted among opposition managers.

For Guardiola, a little defensive insecurity is the downside, perhaps, of being so attack-minded – they set up here with only three orthodox defenders and Fernandinho, a midfielder by trade, filling in when necessary.

When City were going forward, Laporte and Kyle Walker both had carte blanche to break out of a three-man central defence and spread play by moving wide and morphing into attacking full backs. Nicolás Otamendi was sometimes the only player left back, with Fernandinho moving forward to join Ilkay Gündogan in the base of midfield. Ahead of them, Kevin De Bruyne and David Silva had Raheem Sterling and Bernardo Silva operating either side of Agüero. It was a formidable line-up but one that can leave City open to the counterattack.

For that to happen, however, Arsenal needed to get the ball first. Agüero’s second goal came from close range after a lovely exchange of passes involving Sterling and Gündogan and the contest was effectively over when the striker completed his hat-trick just after the hour.

Again, it was Sterling playing the decisive cross from the left. Arsenal’s players appealed for handball but Agüero was already wheeling away, with that familiar smile, the arm raised and the guarantee of another ball for his personal collection. – Guardian