Norwich City beat Leeds to go top of the Championship 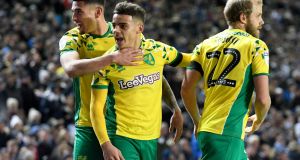 Mario Vrancic hit a brace as Norwich replaced Leeds at the top of the Championship table following a convincing 3-1 win at Elland Road.

The midfielder fired the Canaries ahead with a fifth-minute free-kick before Teemu Pukki doubled their advantage on 36 minutes.

And Vrancic made the game safe when Jamal Lewis won possession before delivering a perfect cross to the striker with 12 minutes to go.

It could have been even more comfortable for the visitors, with Max Aarons and Onel Hernandez missing great chances.

Leeds, who lacked any spark during the match, pulled a consolation goal back in stoppage time through substitute Patrick Bamford.

The visitors got off to a dream start when Vrancic’s free-kick clipped the wall and went in.

Ezgjan Alioski hit a first-time volley just wide of the near post on 13 minutes before Adam Forshaw also went close for the hosts from the edge of the box.

Onel Hernandez then volleyed over an unguarded net after Krul failed to claim an Alioski free-kick on 18 minutes.

However, Norwich doubled their lead when Pukki tapped home from three yards out after a deflected Vrancic shot fell into his path, with both Luke Ayling and Forshaw giving the ball away for Leeds in the build-up.

Krul parried well to keep Roofe out a minute after the goal and an unmarked Aarons blazed over from a Lewis cut-back on 41 minutes.

Norwich survived shouts for a penalty when Roofe went down under a challenge by Lewis on the hour mark.

Alioski failed to get any power behind his shot as Krul held comfortably two minutes later while Aarons should have made it 3-0 when the ball fell his way after some pinball in the Leeds box on 65 minutes.

Aarons then came to the rescue at the other end when he made a goal-saving clearance to prevent Alioski from tapping home on 76 minutes.

However, it was game over when Vrancic finished smartly after a good counter-attack two minutes later.

Hernandez fired inches wide on 83 minutes as Norwich looked to add another before Bamford headed home from a corner one minute into stoppage time to pull a goal back for United, although the damage had been done by then.