McGoldrick and O’Dowda on target in race for promotion 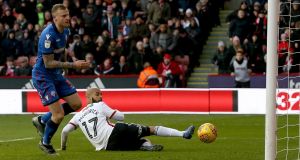 Sheffield United kept the pressure on the top two in the Championship courtesy of a 2-0 victory over Bolton at Bramall Lane.

With leaders Leeds facing fellow high-flyers Norwich in the evening kick-off, the Blades knew they could make ground with a win.

And they did just that as Republic of Ireland international David McGoldrick and Billy Sharp netted their 11th and 20th goals of the season respectively to leave struggling Bolton three points from safety.

Britt Assombalonga fired Middlesbrough to a 3-2 win over fellow promotion rivals West Brom at the Hawthorns.

Jay Rodriguez and Dwight Gayle netted for the Baggies, who trailed to George Saville’s 17th-minute opener.

But Assombalonga, a 65th-minute substitute, made an impact with a brace in the final 15 minutes.

Bristol City surged into the top six, leapfrogging Derby, with a 2-0 triumph over Swansea at Ashton Gate.

Second-half goals from Andreas Weimann and Irish winger Callum O’Dowda secured the Robins their seventh consecutive win in all competitions.

Jota and Che Adams powered Birmingham to a 2-0 win over Martin O’Neill’s Nottingham Forest, who had Yohan Benalouane sent off late on at St Andrews, while Reading and Aston Villa drew 0-0 at the Madejski Stadium.

New Stoke striker Sam Vokes had a debut to forget, missing a penalty in the 2-0 defeat to Hull at the Kcom Stadium.

Jarrod Bowen’s free-kick put Hull ahead in the 44th minute, his 15th goal of the campaign, just before Vokes failed to score from 12 yards, with Kamil Grosicki adding a second for City in the 64th minute.

Bottom-placed Ipswich are eight points adrift of safety after Lucas Joao’s last-minute goal secured Steve Bruce a 1-0 win in his first game in charge of Sheffield Wednesday at Portman Road.

Millwall and Rotherham remain above the relegation zone following a goalless draw at the Den.

Josh Windass and debutant Leon Clarke scored to take Wigan further clear of the relegation zone with a 2-1 victory over QPR, who set up a nervy finish through Bright Osayi-Samuel at the DW Stadium.