Seamus Coleman concentrating on a key run for Everton 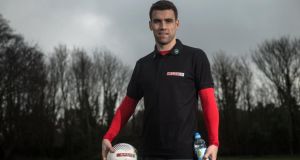 If he intends spending transfer deadline day hanging by his phone, waiting for a call from Jose Mourinho, Seamus Coleman certainly isn’t letting on. The 28 year-old has been the subject of transfer rumours before and knows better than to get worked up about them.

“It is that time of year,” he says. “I haven’t heard about the story (another one in England linking him with Manchester United) but I am preparing for a game on Wednesday and that is all I am concentrating on.”

As he is speaking, at a launch for Spar’s new Better Choices healthy eating campaign (see spar.ie), Darron Gibson is leaving Everton, signing for Sunderland on an 18 month deal. And while the Derryman hasn’t featured much for the Goodison Park club of late, Coleman reckons his sometime Ireland team mate can revive his career, for both club then country, under David Moyes.

“Darron is a very talented footballer,” he says. “His passing range is right up there with the very best. If he is getting plenty of games and regular football, then I wouldn’t be surprised at all (if he gets an Ireland recall).”

The lack of Irish players getting plenty of games and regular football at Premier League level means, of course, that pretty much anyone who is is a strong contender for Martin O’Neill’s squad. However, Coleman does not believe the number of teenagers leaving Ireland to join top clubs is such a big problem; there are, as he knows from personal experience, different ways to reach the top of the professional tree.

“Look, it’s a different game to years ago when the Premier League was not recruiting the number of talented, foreign players that they are now,” he says. “It is just so difficult for young players from any country to break into a first team now at Premier League level. But look, there’s other ways. The SPL, the Championship, League One, the League of Ireland, they’re all good leagues.

“We’d all love to see young Irish talent come through right away and play Premier League football at 18 or 19. But if it doesn’t happen (by then), it doesn’t mean it won’t happen at some other stage. In my situation, I played 55 times for Sligo Rovers; playing for points, learning how three points meant so much to everyone - the fans, the players, the manager. Players had bills to pay. They needed those points to help get another contract. The motivation was there.

“So you had to work so very hard and I brought that attitude with me when I came across. There was a huge benefit to playing so many games in front of fans - and there are benefits for players who came a different route, whether it is the lower leagues in England, or wherever.

“My point is, you can only make the choice that is front of you. It is a tough one, because if you are a 15 or 16-year-old and a club comes in for you, say it is Manchester United or Everton, it’s very difficult to say no. The better route for me, though, might be the League of Ireland. I’ve experienced the benefits of the League of Ireland and it’s great to see Daryl Horgan thrive in that environment and subsequently thrive at Preston. There are benefits to that route but there are benefits for joining a club in England at 16 as well; the training and facilities are second to none.”

Coleman is routinely cited as being about the best piece of business a Premier League club ever did with a League of Ireland outfit but while they might have had an eye for a bargain, Evertonhave not had the financial clout to compete at the other end of the market with their biggest rivals. If the men behind the club are to be believed then that is changing but as they prepare to embark on an important run of winnable games tomorrow night at Stoke (before meetings with Bournemouth, Middlesbrough and Sunderland), Coleman knows have a lot still to do to break into the top six between now and the end of this season.

“We have been playing well recently. We got off to a decent start - then it was a tricky spell - when the top six pulled away in that period. We have been left to play catch-up on them. We want to stay in touch. As a player, as a team, you want to look up, rather than down.

“The top six are difficult to compete with, because of the money they have, the number of talented players within their squads, but we have to try and hold onto their tails. We are five points off. We have to believe.”

The Offload: Philip Browne’s grave outlook should be taken seriously 10:00
All in the Game: Did Rory Delap’s long throws cause the 2008 financial crash? 10:00
Cricket ban on using saliva to shine ball will only be temporary 08:41
UK government says elite athletes must be allowed to opt out of contact training 08:14
Resisting the pull of The Field, Tiger Woods proves fitness in Covid-19 charity match 07:55