Darron Gibson set to re-unite with David Moyes at Sunderland 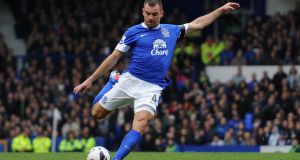 Sunderland boss David Moyes is closing in on a transfer double with Everton duo Bryan Oviedo and Darron Gibson firmly in his sights.

The pair were due on Wearside for medicals on Monday as Moyes once again returned to tried and trusted players in a bid to strengthen his squad with just two days of the transfer window remaining.

Costa Rican full-back Oviedo, 26, would be a replacement for Patrick van Aanholt, who completed his move to Crystal Palace on Monday in a deal which could eventually amount to £14million.

Republic of Ireland international Gibson, 29, would add craft in midfield, although his injury record — he has managed just 54 senior appearances in the last four-and-a-half seasons for the Toffees — would be a concern.

Given that Moyes was told some time ago that he would have “very limited funds” with which to bolster his squad this month, he has had to recruit on a budget and has so far opted for men he knows.

He drafted in Everton old boys Victor Anichebe and Steven Pienaar during the summer and last week added another, central defender Joleon Lescott, to the mix.

The Black Cats have also expressed an interest in Leicester striker Leonardo Ulloa, although it is understood their initial £3million offer was rejected out of hand.

Sunderland currently sit at the foot of the Premier League table ahead of Tuesday night’s visit of high-flying Tottenham to the Stadium of Light, although they are only three points from safety.

1 Australian rugby staring into abyss as another crisis hits
2 ‘This is sick’ - seventh-tier Swedish club cancels friendly after betting mayhem
3 ‘Magnificent’ Conor Connelly remembered after sudden death
4 America at Large: On Long Island, longing for a return to our field of dreams
5 Ringrose set for new central deal; memories of Björn Borg at Wimbledon
Real news has value SUBSCRIBE