Mary Hannigan’s All in the Game: Higuain set for giant raspberry

York City hit out at Trump, sacked groundsman of the week and more 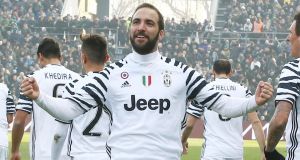 Napoli might have got €90-ish million from Juventus last summer for Gonzalo Higuain’s services, but that didn’t stop their supporters feeling a bit peeved about his departure – especially when it was to Juve, of all clubs. Back in October Naples-based rapper EnzoDong even penned a tune about it all, the catchy chorus going like this: “I’ll only enjoy myself once Higuain dies.” And then there was the restaurant that promised to price their pizzas at €1 when Higuain suffered his first injury at Juventus. No, really.

Anyway, Juventus aren’t due to visit Napoli until April, but there has been concern about just how warm a welcome Higuain will receive, unless he (sensibly) tweaks a hamstring in training ahead of the game and regrettably has to miss it. Football Italia, though, has reported on an effort by a group of Napoli fans to ensure it all passes off peacefully, if a little noisily:

“Leave at home all violent intent,” they wrote. “The Neapolitan people, civilised as we are, resolve issues not with violence, but in a peaceful manner to even the most deadly of wrongs – a single giant raspberry synchronised throughout the entire stadium and then leave it all behind us, goodbye to rancour, because life goes on.”

And that’ll be it, just a loud farty noise and they’ll be done and dusted. If only wars could be sorted in the same way.

Tribute of the week

Arsenal fans, particularly those who have lost faith in Arsene Wenger, were busy hailing Steve Bould’s work from the dugout on Saturday after the 5-0 FA Cup win over Southampton, Wenger looking on from the stands after picking up a touchline ban.

A chap by the name of @ArsenesChilean was so impressed by the assistant manager he put a portrait of him in the Oval Office, just above Winston Churchill’s bust. If you’re confused, spare a thought for Donald and Theresa.

January 2017: “I apologise to anyone who has taken offence. I hope nobody reads too much into it, I was only seventeen.”

Ryan Christie after leaving Celtic for a loan spell at …. yes …… Aberdeen.

Don’t ever forget, the internet is forever. 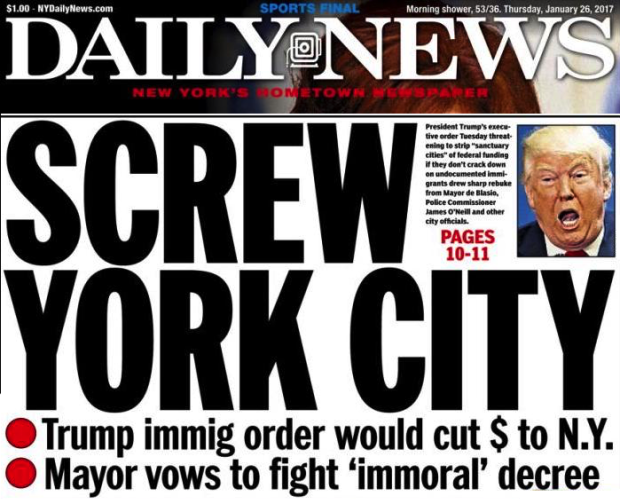 When you’re bottom of the fifth tier of English football and are more likely to drop another non-League division than regain the League status you lost last season, you have enough problems already without the leader of the free world adding you to his bigly hit-list. After spotting this puntastic headline in the New York Daily News, all York City could say was:

“Jack has made a few mistakes that have proved to be costly for his image. For a player like him Middlesbrough would be a fantastic move, in terms of his personal lifestyle. There’s not a lot to do to there…. it’s no Las Vegas.”

George Boateng tries to sell Middlesbrough to Jack Grealish by suggesting he’d be bored out of his skull in the place.

After appointing yet another new coach last week, Diego Lopez replacing Eugenio Corini, Palermo are now up to 11 changes in their sizzling hot seat since November 2015. Lopez announced his contract runs to June 2018. Everyone giggled.

“He is 31 years old but he’s probably got the mileage of a 36-year-old with what he has done in his career…in fact, he is probably in a 40-year-old athlete’s body.”

Rio Ferdinand attempts to pay tribute to Wayne Rooney, but kind of fails.

“They go to sleep in late autumn in a special hibernation den and they don’t wake up until the spring. Their metabolism slows down, their daily patterns change and they just fall asleep. And when they wake again, it’s front page news in the local papers.”

Bayern Munich boss Carlo Ancelotti on what he learnt about bears while living in Canada. To be honest, some of us thought he was talking about Liverpool.

“Denis Suarez could be Iniesta’s long-term replacement, why not? But he has to improve – Iniesta is Harry Potter, he makes magic, and it is difficult to find another.”

“Rome is a wonderful city…of course, travelling in the car is a problem: the streets are like those of Sarajevo after the bombing.”

Roma’s Edin Dzeko needs to get a bike.

Jose Mourinho hailing his team’s draw with Hull City in the League Cup, even though they lost 2-1. That’s Comical Ali you hear purring.

“I don’t look for excuses or anything…I’m not sure if you felt it, but the wind was really strange? It was difficult to handle.”

Jurgen Klopp after Liverpool’s breezy League Cup exit at the hands of Southampton.

“There was interest from Barcelona, but I’d have been a ball boy there. Neymar, Messi and Suarez would’ve played even with one leg and still made the difference, so there was no point in me being there, I wouldn’t play at all.”

Italian striker Sebastian Giovinco explains, not unreasonably, why he turned down a loan move to Barcelona last season.

“The only reason to have him in the team is for his finishing ability and you have to put it on a plate for him. He doesn’t do anything else in the game and when he doesn’t score you are basically playing with 10 men.’

Jamie Carragher doffs his cap in the direction of Daniel Sturridge.

Sacked Groundsman of the Week

That’d be Southend United’s Ken Hare who was given his marching orders by the club, after 27 years’ service, when they blamed him for the postponement of their league game against Bolton four hours before kick-off due to a frozen pitch. “People generally tend to lose their position as a result of not doing their job,” said the club statement, which left the entire planet concluding that they’re a touch twat-ish.

The Guardian’s Twitter detectives then noted that it was only a fortnight since the club paid tribute to Hare and his team for their work. “The pitch is looking [GOOD]. Hats off to the groundsmen here at Roots Hall who have worked tirelessly.” When Hare was sacked? They deleted the tweet. It was, perhaps, an awkwardly alternative fact.

1 Gerry Thornley: Ireland don’t want to box themselves into a corner
2 Owen Doyle: Ireland suffered from officiating of the breakdown
3 Kevin McStay: Maybe a knockout All-Ireland Championship is the long-term solution?
4 Dublin’s monopoly an increasingly difficult problem for Leinster Council
5 Thomas Galligan and Cavan raring to meet Dublin in Croke Park
Real news has value SUBSCRIBE
Crossword Get access to over 6,000 interactive crosswords