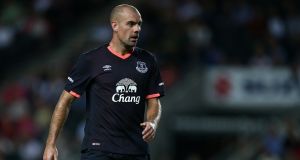 Darron Gibson has completed his move from Everton to Sunderland. Photograph: Catherine Ivill/Getty

Darron Gibson has completed his move to Sunderland with the 29 year-old midfielder becoming the latest player from either Everton or Manchester United to link up once again with David Moyes.

The Republic of Ireland international’s transfer was part of a joint deal that also involved left back Bryan Oviedo, the 26 year-old Costa Rican who, like Gibson, found first team opportunities hard to come by at Goodison Park.

In the Derryman’s case, there were just 51 first team appearances since he joined back in 2012. He had not been helped during that time by the number of injuries, some of them very serious, that he had sustained, but even when fit of late he found that he had slipped well down the pecking order and he had just a couple of appearances this season, both in lesser competitions and one of them for what was effectively an under-23 side.

Moyes knows the player well and clearly sees some potential but his comments regarding the move scarcely suggested excitement on his part:  “We’re not paying a big price for Darren,” said the Scot. “We’ve got him on a 18 month contract. I think he’ll add a bit of quality in his passing and play for us. I’d love him to add goals for us because he’s a really good striker of the ball, he’s a good shooter, if he could get us some goals from midfield that’d be a big bonus.

“The big reason (for signing him) is not having Cattermole, Kirchoff, Paddy McNair, looking like that’s for the bulk of this season, I didn’t want to take a chance and find that we were scratching around in the coming weeks.”

Sunderland are believed to have paid around €8.8 million for the pair with the bulk of that going on Oviedo. For Gibson the move has a hint of “last chance saloon,” about it with the player running out of chances to nail down a regular place at a club and prove that he can still deliver on the potential people saw in him during his time with Manchester United and the early days at Everton.

Ireland manager Martin O’Neill has suggested that a Gibson who was playing first team football and producing something like his best form would be a welcome addition to his international squad but it remains to be seen whether this move really does prove to be the fresh start that the northerner has needed to kick-start his career.