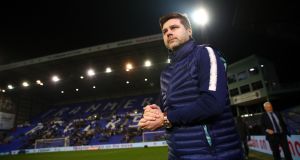 Mauricio Pochettino was in soul-searching mood. The Tottenham manager had brought up Arsène Wenger and how his former adversary at Arsenal had endured “a lot of limitations” with regard to the Emirates Stadium build but, at the same time, was still expected to win trophies.

To Pochettino, the parallels to his present situation are plain and that is not to say they have surprised him or made him unhappy. He knew what he was signing up for in 2014 when he accepted the job offer from the Spurs chairman, Daniel Levy, and the overall boss, Joe Lewis.

It was to manage the team on a relative shoestring, driving it as hard as he could, as the club streamed their revenues into the new stadium project. In other words, precisely what Wenger did for much of the second part of his 22-year Arsenal tenure.

Pochettino’s problem – if that is the right word – has been that he has performed ahead of the curve. He says that Levy’s demand was for the club to enter the new stadium with the chance to compete for a top-four Premier League finish and then to deliver one in the season after that.

Instead, Pochettino has returned top-three finishes in each of the last three seasons and the expectation now is that he wins trophies. It is the obvious next step, albeit the most difficult one, and it colours the club’s Carabao Cup semi-final against Chelsea – the first leg of which is at Wembley tonight.

Pochettino’s thoughts turned to Wenger’s longevity and loyalty at Arsenal and he said that he had one question for him. Was it worth it? It is a question that appears to resonate with Pochettino as he approaches a crossroads in his career. Does he remain true to the project at Spurs or would he be tempted by an offer from Manchester United and/or Real Madrid in the summer?

“Only I hope, if I have the opportunity to talk with Arsène Wenger, is to ask if it was worth it to do?” Pochettino said. “I don’t know what he would say.”

He has an inkling. “I have massive, huge respect for Arsène Wenger because when you talk about 22 years in charge of a club like Arsenal, you need to be so good – not only a fantastic coach but a great human being to display the values you have,” Pochettino said.

“That is why it is a little bit sad the way it ended at his club. It shows how difficult this business is. But for us, it is not a business, it is a passion. All that Arsène Wenger gave for Arsenal, to finish in the way it finished, yes, was a little bit unfair.

“Do I see the similarity between his situation at Arsenal and mine at Spurs? Yes, although it’s true this is only my fifth year. It’s true we work and we know the reality and sometimes we cannot expect that the people live the same reality or have the same knowledge about what happens inside [the club].

“I hope or I wish to be here 20 years and decide to leave or to finish my career here. But I don’t know because I need to ask him one day if he is so happy in the way that he finished . What I saw from my point of view was it was so unfair how the people treated him and talked. But we’ll see.”

Pochettino made the point explicitly that he is happy at Spurs at the moment. He will not deviate from this line. It is just that he also acknowledges it is impossible to foresee the future.

“The only way the people think is about money,” Pochettino said. “That is going to help but at the moment I am happy. Today, the club is doing what the club needs to do and I am so happy to be here.

“The project is so clear. It’s true the people are so impatient but it’s going to arrive. We are creating a legacy that is going to be amazing for the future of the club. I can see in the future Tottenham winning trophies. I don’t know if [it will be] with us or without. In one year or five years.”

The issue of squad strengthening is never far away in English football, particularly in January, and Pochettino said that if Spurs were to win the biggest prizes, they must invest more heavily.

“I saw a stat about how teams were spending money in the last 10 years and we were on the bottom in England and Europe,” he said.

“If we want to be real contenders, we need to operate in a different way in the future. At the moment it’s fantastic – so far so good – but we’ll see if it’s enough to challenge and be consistent in the next five years operating in that way; if we’re capable to fight with the big sides in the same way that we’ve fought [with them] in the last four or five years.”

Pochettino is not the type of manager to bang down the chairman’s door for new signings and, at Spurs, he has relished the challenge of finding other ways to compete, such as developing players from the academy. Equally, he is not blind to the benefits of big spending.

“If you have money, like the other top six clubs, and you need [something], you buy it,” Pochettino said. “If we need, we build and we need time to build. There is Chelsea, Arsenal, City, Liverpool, United – and us. When people put us in the same level with expectations and everything, it’s unfair.” – Guardian