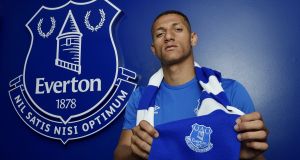 “Everton have put their faith in me and I intend to honour this shirt and demonstrate on the pitch why I came here.”

Richarlison has completed his move to Everton from Watford which is hopes can help his “dreams to become a reality here at one of the biggest clubs in England”. The five-year deal will cost the Merseyside club up to £40 million.

Richarlison told evertontv: “I want to have a lot of success with Everton. I think it is going to be important for me here to be with Marco Silva again. I will learn more because I am still learning as a player and I aim to develop and grow here. Everton have put their faith in me and I intend to honour this shirt and demonstrate on the pitch why I came here.”

It emerged last week that Everton were closing in on signing the Brazilian forward, who played for the Toffees’ manager Marco Silva at Vicarage Road last season. Richarlison said: “I’ve known the manager for a while obviously, so I know how he works.”

The 21-year-old joined Watford, where Silva was newly installed as manager, from Fluminense last summer. He scored five times in his opening 12 Premier League matches, but did not find the net again for the rest of the campaign.

Richarlison added: “I want to score more goals, provide more assists for my teammates and help in whichever way is possible. Everyone in the world knows Everton. It is a very big club, one of the biggest in England as I said. I am really happy and honoured to be here.”

Silva told evertontv: ““He is a good player who will make our team and our squad more competitive. The player is fast, strong, very good technically and he can play in three positions across the front line. He can also score goals.Evertonians will see a player who will be 100% committed to helping our team always.”

Everton and Watford have had a somewhat testing relationship, with the Merseyside outfit seeing an initial approach for Silva rebuffed after they sacked Ronald Koeman in October last year.

Watford subsequently decided to dispense with Silva’s services in January, saying the “unwarranted approach” had been the “catalyst”, leading to “a significant deterioration in both focus and results”.

Everton named Sam Allardyce as Koeman’s successor, and after he was then sacked at the end of the season, Silva was appointed on May 31st.

With recruitment finally under way the new manager has to start trimming down a bloated squad. So far only striker Wayne Rooney and the reserve goalkeeper Joel Robles have departed permanently but Silva is keen to bring in more players, with an interest in the Barcelona left-back Lucas Digne.