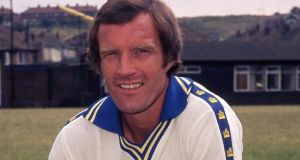 Former Leeds United player Paul Madeley has died at the age of 73.

Former Leeds player Paul Madeley has died at the age of 73, the club have announced.

“Paul Madeley passed away peacefully today (July 23rd) surrounded by his family in Leeds,” read a statement from his family, published on Leeds’ website.

“Paul was a much-loved husband, father and brother and the family are extremely proud of his achievements in life and on the field for Leeds United and England.

“He was born in Beeston, a stones-throw from Elland Road, and only ever played and supported Leeds United.

“The late Don Revie christened him his ‘Rolls Royce’ and to us he was just that — a class act as a husband and a father who always had time for everyone he met.

“Paul’s wife Ann and sons Jason and Nick would like to thank everyone for their support and well wishes.

“At this difficult time, we ask for privacy as we grieve a great loss.”

Madeley, who mainly operated in defence or midfield but played in every position other than goalkeeper for Leeds, made more than 700 appearances for his hometown club.

He made his first-team debut in 1964, a season which ended with Leeds winning the old Second Division title, and went on to play a major role in the most successful era in the club’s history.

During his Elland Road career, the Whites won the First Division in 1969 and 1974, as well as finishing runners-up five times.

“Everyone at #LUFC is deeply saddened to hear of the passing of #LUFC legend Paul Madeley. Our thoughts are with his family and friends,” Leeds wrote on their official Twitter account.

Madeley made his international debut against Northern Ireland in 1971, with his final appearance for his country coming six years later against Holland.

Leeds chairman Andrea Radrizzani tweeted: “Incredibly sad to hear about the passing of a Leeds legend. RIP Rolls Royce — my condolences to Ann, Jason, Nick and the rest of his family.”

Former Leeds defender Dominic Matteo said Madeley was a “Rolls Royce of a player” and “could play anywhere on the football pitch”.

East Leeds MP Richard Burgon said he was “sad and shocked” by the news, adding: “A Leeds lad and an all-time great in a team that defined the club and our city. He was a Champion. A Champion of Europe.”