Will Maurizio Sarri’s philosophy of fun translate to Chelsea? 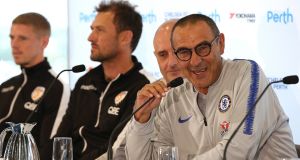 When Claudio Ranieri first arrived in the Premier League, he caused a minor stir because of his inability to speak to the media in English. “Ranieri finds trouble in translation” was the headline in the Guardian after Chelsea lost to Everton in November 2000, which goes to show how tough it was for the affable Italian during his early days as an outsider in a strange and suspicious country.

The man who would eventually lead Leicester City to the title was the Manuel to English football’s Basil Fawlty, raising the hackles with his inability to communicate with players and supporters. Yet at least Ranieri’s insistence on speaking to the media in Italian gave rise to one of the great comedy episodes. The story goes that when Ranieri had finished giving a detailed three-minute answer, his interpreter would nod and say “It’s a game of two halves” in English.

Whether or not this is an urban myth is not entirely clear. But let’s agree that it definitely did happen, given that the tale came to mind when Chelsea’s media team had to correct a couple of mistranslations after Maurizio Sarri’s unveiling at Stamford Bridge on Wednesday. Sarri had introduced himself to the English media in Italian, just like Ranieri did back in the day, and the interpreter had made one or two small errors.

Point No 1: when Chelsea’s new manager revealed that he wanted to add “a pinch of quality” in central defence, he had actually mentioned central midfield. Makes sense, I thought, my mind drifting back to the February evening when Tiémoué Bakayoko played as though his shoelaces were tied together during a 4-1 defeat by Watford, the January evening when Antonio Conte looked at Ross Barkley as if he was a piece of pineapple on a pizza, and the September evening when Chelsea completed their Danny Drinkwater coup.

Moving on, then, point No 2 referred to the moment when Sarri appeared to suggest that entertaining defeats can be more enjoyable than boring wins. Here was a reminder of how much language matters, how one slip of the tongue can alter our impression of a manager before he has even taken charge of his first game. It was the kind of comment with the potential to make José Mourinho add Sarri’s name to his big book of Poets, Philosophers and Other Romantic Losers. In red ink. And capital letters.

What Sarri had actually tried to get across was that fun and winning should go hand in hand. Yet even that sounded strange, if only because football can be such a serious business. In fact, there were a few times when I had to check my headphones to make sure I was hearing correctly, not least when Sarri announced that the transfer market bores him and he prefers to develop his players with good coaching. A check with Chelsea’s press officer confirmed that the former Napoli manager had not demanded that Roman Abramovich buy him Neymar for £500m and a pair of gold shoes.

Sarri is different. The 59-year-old is a former banker who never played professionally and, although he is yet to win any trophies, there is a reason he has developed close friendships with Pep Guardiola and Arrigo Sacchi. “Ours is not a sport but a game,” he said. “Anybody who plays a game started doing it as a child for fun and the child in us must be nurtured because this often makes us the best. To create play that is fun is the first thing to obtain a style for a high-level squad.”

On the one hand he could be an inspired appointment. On the other we could be six months away from the damning articles about where it all went wrong

That beautiful, refreshing sentiment was not said for effect. Sarri meant every word, proof that he is not afraid to stand out from the crowd. Conte liked to talk about the need to work hard. His successor’s buzzword is “fun”.

Admittedly that can make Sarri sound a little like an enthusiastic children’s party entertainer whose sunny world view is about to be crushed by a room of screaming brats and tired parents, while there is a strong chance that a slow start would leave him vulnerable to being dismissed as an overly cheery fraud who must adopt a win-at-all-costs mentality.

The refusal to conform can make people uncomfortable and it is debatable if a manager with Sarri’s track record will succeed in his quest to lighten the mood at Chelsea. On the one hand he could be an inspired appointment. On the other we could be six months away from the damning articles about where it all went wrong. “At first Maurizio had a smile on his face every day,” a top inside source will say. “But you could see he was losing the will to live when David Luiz kept responding to everything he said by sticking his fingers in his ears and shouting ‘La La La La.’”

Chelsea, who are having an uncertain summer, might have to accept that their reinvention as the Freewheeling Funtime Sarris will take time. Encouragingly, however, there are signs that the tone of the conversation is changing. Suspicion has become less fashionable than a willingness to engage with fresh ideas, empathy a more desirable and modern quality than attention-seeking abrasiveness. More than anything, the reaction to England’s World Cup run showed people crave a connection with their team. Almost 20 years after the chuckles at Ranieri’s expense, English football is prepared for a new way of talking. Listen closely enough and it might put a smile on your face. – Guardian