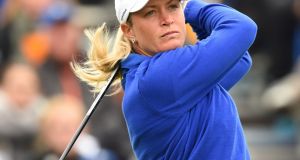 European Solheim Cup captain Catriona Matthew has named Suzann Pettersen and Kathryn Imrie as vice-captains for next year’s contest against the United States at Gleneagles.

Pettersen has played in the biennial contest eight times and was also a vice-captain to Annika Sorenstam in 2017 after she was forced to withdraw due to a back injury.

Imrie played in the 1996 contest in Wales and won 1½pts from three matches. Matthew said: “I am delighted to have Kathryn and Suzann alongside me on the journey to the Solheim Cup at Gleneagles. They both possess considerable experience and will be huge assets over the next 14 months as we look to bring the trophy home to Europe.”

Norway’s Pettersen, 37, who is expecting her first child this autumn, added: “The Solheim Cup has definitely been the highlight of my career and to be able to help the team bring the trophy back would mean a lot to me.”

Imrie is a good friend of Matthew and the 51-year-old from Dundee said: “As one of her closest friends it will be easy to be her sounding board and to offer opinions and suggestions about all aspects of her captaincy.”