Meanwhile, Wes Hoolahan scored for Norwich as they moved close to the playoffs 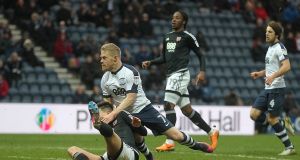 Aiden McGeady’s double helped Preston put a four-match Championship winless streak to bed as they came from behind to beat Brentford 4-2 at Deepdale.

Tom Field handed the Bees an early lead but McGeady levelled with a magnificent strike and Callum Robinson gave North End the advantage after the break.

Right-back Colin latched onto Harlee Dean’s ball forward after five minutes to force Chris Maxwell into a smart save as the Londoners started brightly.

And the away side took a 12th-minute lead when Jota’s corner was met by an unmarked Field to head home, as the Lilywhites defence fell asleep.

The Republic of Ireland international then drew Preston level after unleashing a sublime shot from at least 20 yards which flew past Daniel Bentley for his second of the campaign.

McGeady fired a curling free-kick just over on the half hour and later slipped in Robinson for the former Aston Villa man to force Bentley into action.

Jota almost handed his side back the lead with a teasing 36th-minute effort which curled wide, while Maxwell was quick off his line to deny Florian Jozefzoon just before the break.

But Robinson handed Preston the lead after tapping home from McGeady’s 52nd-minute ball into the box for his seventh league strike this season.

Shortly after, Bees skipper Dean attempted to drag his side back into the game with an ambitious long range effort which sailed just over.

Field then ghosted past Horgan and set up Lasse Vibe, whose flick trickled towards goal and off the post before being cleared by some last ditch Preston defending.

McGeady wrapped up the points with a quarter of an hour left after shrugging off two challenges and curling a fantastic shot past Bentley.

Hugill nearly added Preston’s fourth moments later after racing clear to go one-on-one but Bentley was quick off his line.

But Horgan made no mistake after being slipped in by Ben Pearson and coolly slotting home in a Preston counterattack on 77 minutes, while Colin grabbed one back for Brentford a minute from the end as his heavily deflected effort went in off the bar.

Meanwhile, Wes Hoolahan was among the goals as Norwich maintained their push for the play-offs thanks to three goals in the space of eight first-half minutes which inspired them to a thumping 5-1 home win over Nottingham Forest.

Jonny Howson’s 10th-minute piledriver opened the floodgates at Carrow Road, with Josh Murphy quickly adding a second from a tight angle before Wes Hoolahan lobbed in a third from well outside the box.

The Canaries, who have now won six of their last seven home games, added two more goals in the second half, with Alex Pritchard scoring them both, and Forest’s only consolation was a well-taken goal for on-loan substitute Ross McCormack.

Also on Saturday Brighton stormed back to the top of the table with a 4-1 victory over struggling Burton.

The Seagulls knew a win would send them above previous leaders Newcastle, who are in action at Wolves in the evening kick-off, and they got the perfect start at the Amex Stadium.

Tomer Hemed grabbed his eighth league goal of the season on 12 minutes and Brighton doubled their lead just after half-time through Sam Baldock.

Hemed added a 57th-minute penalty and Glenn Murray wrapped up the victory late on after Michael Kightly netted a consolation for Burton.

Huddersfield kept up their hunt for promotion with a 2-1 win away at QPR which sent them up to third.

Izzy Brown struck on 26 minutes and Nahki Wells added a second for the Terriers 10 minutes later.

Luke Freeman gave QPR hope with a goal on the hour mark but Huddersfield held on to leapfrog Reading, who drew 0-0 away at Barnsley.

Fifth-placed Leeds lost ground on their promotion rivals after being beaten 2-0 at home by Cardiff.

Sean Morrison opened the scoring and Kenneth Zohore added a second for the Bluebirds on 71 minutes.

Leeds midfielder Liam Bridcutt was sent off four minutes from time for a second bookable offence as Garry Monk’s side lost for the second game in succession.

The Robins were 3-0 ahead after just 38 minutes, with Tammy Abraham’s double following Matty Taylor’s first goal since his move from Bristol Rovers.

Bent reduced the deficit for the Rams just after the break and Tom Ince added a second for the hosts before the former England striker secured a point with a penalty on 81 minutes.

Blackburn failed to take full advantage of Bristol City’s slip-up but Rovers did pick up a late 1-1 draw against bottom-of-the-table Rotherham.

Neeskens Kebano scored a last-gasp winner for Fulham as they beat lowly Wigan 3-2 at Craven Cottage.

Floyd Ayite gave Fulham the lead midway through the first half before Scott Malone’s own goal on 32 minutes and Michael Jacobs’ strike in first-half added time turned the game on its head.