Three reasons why Liverpool and Manchester City can win 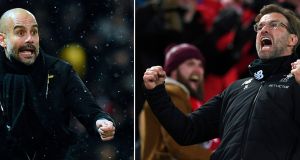 1) The success of Klopp’s press

Jürgen Klopp said Liverpool’s pressing game in the second half of January’s 4-3 defeat of City was “on a different planet”. He is likely to request a repeat given the multitude of problems it caused Pep Guardiola’s team in what remains their only Premier League defeat this season. Liverpool’s full press created several openings and goals that day – Sadio Mané struck a post after another forced error with the game at 2-1 – and Klopp is unlikely to change tactics as he seeks a seventh win in 13 against Guardiola. “You have no alternative if you want to beat City,” said Klopp, who has beaten his counterpart more than any other manager. “You could sit deep in your box and hope nothing happens but we are Liverpool and we should try to win this way.”

With Benjamin Mendy and Fabian Delph sidelined, and Danilo unconvincing, it was Aymeric Laporte’s turn to occupy the left-back spot against Everton on Saturday as Guardiola switched the world’s second-most expensive defender out wide. Even in a comprehensive away win that position remained City’s one concern, with Everton occasionally getting in behind the former Athletic Bilbao centre-half, and the outstanding Mohamed Salah poses far greater danger. Salah has scored in each of his last seven starts at Anfield – a sequence of 12 goals in total – and has regularly dismantled established full-backs throughout a season that has brought 41 goals in 46 appearances for club and country. Liverpool are strongest in attack while City are weakest in defence and the Egypt international shows no sign of slowing down.

When discussing what makes Liverpool an “extraordinary team” following the win at Everton, Pep Guardiola cited the “almost unstoppable” front three of Salah, Roberto Firmino and Sadio Mané, Alex Oxlade-Chamberlain running through the middle plus the aerial threat of Virgil van Dijk. The latter was praised with good reason. Van Dijk missed the 4-3 win with a tight hamstring and has helped Liverpool record five clean sheets in their last eight matches but it is his ability to dominate at set pieces that will worry a City team that is not exactly blessed with height. The £75m defender has scored only once for his new club, a late set-piece winner on his debut against Everton in the FA Cup, but alongside Dejan Lovren he offers Liverpool another way to punish the Premier League champions-elect. Andy Hunter

Forget whether the Brazilian performs the goalkeeper’s bread-and-butter of keeping the ball out of the net. Instead, the 24-year-old’s X-factor in this City side is as its first point of attack and the astute choices he makes between short and long balls. If his radar is on – as it usually is – Liverpool could concede in a flash, as was illustrated at Everton on Saturday. After Yannick Bolasie missed a headed chance in the first half, Ederson drove a pinpoint pass to Leroy Sané, who pirouetted in the centre circle before finding Kevin De Bruyne. His cross was headed home by Gabriel Jesus and suddenly City were 2-0 up.

2) De Bruyne and Silva to pull the strings (yet again)

Strangely for Guardiola, David Silva was an unused substitute when City came out on the wrong end of that remarkable Anfield match in January. The manager will surely not make the same mistake again, because when the Spaniard and Kevin De Bruyne are in tandem the pair define “unstoppable”. The latter has been so formidable he has a real chance of vying with Silva as City’s best-ever footballer, should his form continue over coming seasons, as well as being a strong contender for the 2017-18 Premier League player of the season. Both find space and time most are unaware of, with Silva’s more subtle sorcery complemented by De Bruyne’s greater directness.

Sergio Agüero’s injury absence may have saved Guardiola having to drop his 30-goal man because, despite the impressive return, he still fails to enjoy the full confidence of his manager. Jesus’s goal at Everton was timely, then, as it was only his second since mid-November. The Catalan believes City play a fraction more quickly and on the turn with the Brazilian, rather than Agüero, heading the team, which against Liverpool will be just what Guardiola wants. For Jesus this is a golden chance: it constitutes his biggest game yet for City and presents an opportunity to show he can carry the attack when it really matters. Jamie Jackson