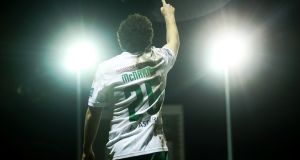 The champions could scarcely have been any more comfortable here in the end although it took a quick-fire four-minute spell midway through the second half to put the whole thing beyond doubt.

Until that they had made surprisingly heavy work of putting away a Bray side that looks better at times than its solitary league point would suggest but nowhere near good enough to deal with City when they hit their stride.

There were only glimpses of that, to be fair. John Caulfield’s side started well and led after eight minutes thanks to Seán McLoughlin but they then failed to take control in the way that would have been expected until the 65th minute when Barry McNamee beat Aaron Dillon with a low shot toward the far post.

Within two minutes Kieran Sadlier appeared to make it three with a free from the edge of the area, although McLoughlin came away claiming that had had got a touch, and within another minute of that Sadlier wrapped it up with a wonderful strike from more than 30 yards out sailed over Dillon and into the goal.

Bray’s build-up for such a challenging game could, of course, have been better. Since losing to Shelbourne in the League Cup this week, assistant manager Jason McGuinness had departed and there has been renewed talk of trouble behind the scenes.

Dave Mackey, in the circumstances, could have done with even the sort of performance that might have provided something to build on but after six straight league defeats since the opening night draw in Oriel, he would have been doing well to get it here.

The way the night started, he might actually have expected worse. City got off the mark after a particularly slack piece of defending by the hosts whose failure to deal with a fairly straightforward McNamee free cost them when McLoughlin eventually fired home from a few yards out.

It seemed set to be the first of many with Wanderers defending deep and in numbers but to little enough effect initially. Sadlier and McNamee both caused problems from wide positions although Graham Cummins got surprisingly little to work with up front.

City may have been overly patient about opening their hosts up but the opening 20 minutes were one-way traffic and so it seemed as though they had all the time in the world.

Somehow, though, Caulfield’s side saw their grip on the game slip and Bray began to show a bit of quality for spells. It was rarely enough to generate a worthwhile chance on goal with things tending to break down at some stage due to a sloppy pass. But having looked a lonely figure through the opening stages, Mark McNulty was required to produce one really fine save from Jake Kelly to keep his side in front.

That, though, was the height of it for the locals. As City stepped things up, Gearoid Morrissey had two great chances to double his side’s lead. Dillon made a decent save or two but there was suddenly a slightly last-gasp aspect to the way Wanderers were getting by with a couple of scrambles from set pieces.

McNamee’s goal was a world away from McLoughlin’s early close-range effort, though, with Sadlier releasing the former Derry City midfielder who got away from Hugh Douglas before finishing sweetly.

With Sadlier’s free, the home side’s heads went down and there might have been more after Sadlier’s stunning long-range strike had Cork not taken their collective foot off the pedal safe in the knowledge that they had secured their biggest win of the campaign so far.

Ken Early: Despite coronavirus, Premier League season must be finished if at all possible 06:00
Summer tours next in line for postponement as rugby assesses options 05:00
Favourite sporting moment? It’s a bit like choosing your favourite child . . . 01:00
My favourite sporting moment: When Zidane glided through Brazil in 2006 01:00
Angling Notes: Many fisheries have closed for the foreseeable future 00:00