Bulgarian prime minister has called on the BFU president to resign 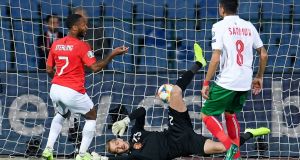 The Bulgaria goalkeeper Plamen Iliev has said the home fans “behaved well” during the Euro 2020 qualifier against England at the Vasil Levski Stadium on Monday night, suggesting that Gareth Southgate’s players “ overreacted a bit”.

The match, which England won 6-0, was twice halted for racist chanting but the Ludogorets goalkeeper said he had not heard anything, echoing comments made by his manager, Krasimir Balakov.

“If I am honest, I believe they [the fans] behaved well today,” Iliev said. “There wasn’t any abuse [as far as I could hear] and I think they [the England players] overreacted a bit. The public was on a good level – I didn’t hear any bad language used towards their or our players.”

Balakov, who had suggested before the game that England had a bigger problem with racism than Bulgaria, said after the defeat: “I personally did not hear the chanting. I saw the referee stopped the game but I also have to say the behaviour was also not only on behalf of the Bulgarian fans but also the English fans, who were whistling and shouting during the Bulgarian national anthem. During the second half they used words against our fans which I find unacceptable.”

The comments by Iliev and Balakov contrasted heavily with those of the captain Ivelin Popov, who had tried to calm things during the game by speaking to some of the fans. “First, I tried to talk with the stewards who were supposed to control the situation,” the Rostov midfielder said. “We’re all suffering from that kind of behaviour. Do you think a foreign player would like to come and play in Bulgaria after what happened tonight? Racism is a world problem that needs to be eradicated. We’re all people regardless of the skin colour.”

The racist chanting dominated the headlines in Bulgaria on Tuesday morning. “There’s no light! It’s been buried beneath six goals and tons of shame,” read the headline of the sports website Gong.bg, with the accompanying piece saying: “Bulgarian football and the country as a whole suffered one of the most shameful nights in its entire history – not only was the national team beaten 6-0 by England but the game was twice stopped for racist chants. A handful of fans stained not only Bulgarian football but Bulgaria as a country after racially abusing the England internationals.”

Another sports website, Sportal.bg, went with “Such a shame! A historic humiliation”, while one of the most famous TV pundits in Bulgaria, Borislav Borisov, said: “Every country’s national team is an institution but on Monday night our national team was destroyed. With the way England reacted to the racial abuse they wanted to make a statement – they wanted to stand up against racism and they did it.”

Meanwhile, Uefa is coming under increasing pressure to take strong action against the Bulgarian football union.

European football’s governing body is awaiting reports from the referee, Ivan Bebek, and its match delegate but is expected to charge the BFU on Tuesday. A section of the Vasil Levski Stadium was closed on Monday after Uefa imposed sanctions over racist incidents during Bulgaria’s qualifiers against Kosovo and the Czech Republic in June, and the punishment is also due to cover next month’s home game against the Czechs.

With the anti-racism charity Kick It Out leading calls for Uefa to consider excluding teams from major tournaments to tackle discrimination, it remains to be seen whether the governing body will go further than ordering Bulgaria to play their next home game behind closed doors. That was Montenegro’s punishment after England’s players suffered similar racial abuse during the qualifier in Podgorica in March.

The Football Association chairman, Greg Clarke, has called for authorities to show “zero tolerance”, and the anti-discrimination group Fare has said it will help Uefa build a “legally safe” case to prosecute Bulgaria.

“We had observers at the match and they have an official role in the sense that they will have flagged up issues with the delegates and they will also have collected evidence of what we all saw through our TV screens,” said Fare network’s executive director, Piara Powar.

Kick It Out’s chief executive, Róisín Wood, said: “I think there has to be a massively thorough investigation. The fines from Uefa we don’t think are enough. There have to be serious steps now, and that should include looking at expulsion or not letting people enter tournaments, because there has to be a clear message. This is 2019. These are professional players going out to play. You would never expect to get this in your workplace so why should professional players get it in theirs?”

“I urge Borislav Mihaylov to immediately resign as president of the Bulgarian Football Union!” Boyko Borissov posted on Facebook. “It is unacceptable for Bulgaria, which is one of the most tolerant countries in the world, and people of different ethnicities and religions live in peace, to be associated with racism and xenophobia.”

That response was welcomed by England’s Raheem Sterling, who was targeted by the home fans along with his teammates Tyrone Mings and Marcus Rashford. “A good move credits to you M. Borissov,” Sterling wrote on Twitter.

However, Borissov later added when questioned by reporters: “It was a bunch of idiots who caused the troubles. Nevertheless, I would ask the visitors from England to not overreact – we’re not commenting on their fans’ hooligan behaviour in Sofia, are we?”

Ben Robinson, the first black chairman in British football, described the racism at the game as “appalling”. He told the Today programme: “Racist chanting, political gesturing with Nazi salutes, it was racism in the extreme which we don’t want to see in any walk of life, especially in football.”

The Burton Albion chairman praised the England team’s conduct, saying players “acted with great dignity”, adding: “That should send a message for Fifa and the national governing body to look at the situation going forward.”

Bulgaria manager, Balakov, has faced criticism for claiming in post-match interviews that he did not hear any racist chanting. English football reporter Simon Peach, from PA, wrote on Twitter: “A few locals tutted when I asked a follow-up question about whether he was surprised the match was halted given he was unaware of any racism.”

Meanwhile, Kaveh Solhekol of Sky reported that Gareth Southgate’s post-match press conference was interrupted by a Bulgarian journalist “convinced racism at the game was not as bad as we witnessed”. He also tweeted that “a Bulgarian cameraman next to me tells Southgate to fuck off at the end.” – Guardian