Stephen Kenny’s side suffer first defeat of the campaign 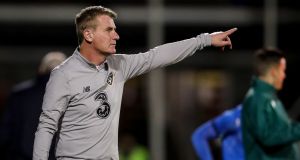 Stephen Kenny’s side were beaten in Iceland. Photograph: Oisin Keniry/Inpho

Stephen Kenny believes a concoction of poor refereeing and a surreal atmosphere in Reykjavik contributed to his Republic of Ireland under-21s side losing their unbeaten record in the European Championship qualifiers.

Ireland remain top of their group but this defeat to Iceland could be fatal to their hopes of reaching the 2021 finals without having to navigate the play-offs.

Played on an artificial pitch at the Viking Arena, Kenny admitted the windy conditions in a stadium with three open sides descended the game into a farce.

He was also frustrated with Moldovan referee Dumitri Muntean for awarding a contentious penalty, an injustice later compounded by Lee O’Connor’s dismissal.

The official penalised O’Connor on 29 minutes for blocking Alex Hauksson’s shot. Television replays showed that the effort struck his back rather than arm.

In the final minute, with Ireland chasing an equaliser, the fussy referee issued O’Connor with a second yellow card for a tackle on Jan Porsteinsson. “Their player made the most of it,” contended Kenny afterwards.

O’Connor is joined on the suspended list for next month’s trip to Armenia by Jayson Molumby after Ireland’s captain incurred a booking following a skirmish at the final whistle.

It ended a frustrating afternoon for Ireland who failed to spark in front of goal. Adam Idah’s header which looped onto the roof of the net approaching the break was their best chance to equalise.

The subdued atmosphere at the Reykjavik venue was the opposite to the packed Tallaght Stadium last Thursday. Ireland followed up three victories by holding top seeds Italy scoreless before a record crowd of 7,231.

Kenny admits the contrast was a leveller for his high-flying team. “It was a surreal international,” he said. “We’ve gone from the Italy game to having 40 people watching this match.

“A lot of the players wouldn’t have experienced anything like today. The match was played in a wind-tunnel and space was at a premium.

“When it’s on a good pitch, likes our meetings against Sweden and Italy, the game is based around who can win the game on skill and quality.

“This match became a farce, needing other qualities from our players. We showed some of those qualities but Iceland got everyone behind the ball once they scored.

“The margins are very narrow at this level.”