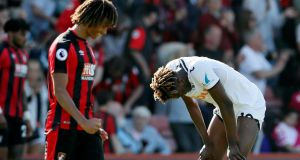 Swansea missed out on the chance to ease their relegation fears as they went down 1-0 at Bournemouth.

With Stoke having been condemned to the drop earlier on Saturday, the Swans would have gone a long way to ensuring they do not take one of the remaining two spots by emerging from the Vitality Stadium with the three points, but they were undone by Ryan Fraser’s first-half goal.

Alfie Mawson fouled Wilson on the edge of the area and Andrew Surman squared the free-kick to Fraser, whose first-time effort took a slight nick off Mawson and sailed past Lukasz Fabianski.

Carlos Carvalhal’s men spurned several chances but their failings in front of goal meant they remained very much in the relegation mire.

The first of their two remaining games is against Southampton, in a clash which could decide the fates of both teams.

For Bournemouth it was a first win in six games and ensured they will definitely have a fourth successive season in the top flight.

They did commit bodies forward in search of an equaliser but lacked the quality in the final third and could have gone down to a heavier defeat.

West Ham took a giant leap towards securing their Premier League survival and piled more pressure on Leicester boss Claude Puel with a 2-0 victory at the King Power Stadium.

Puel’s side went into the match having won just twice in their last 11 Premier League games but the Frenchman received the dreaded vote of confidence from club’s owners this week.

His cause was not helped on Saturday by the absence of nine players through injury and suspension but Leicester’s performance, on a hot afternoon, was lukewarm at best.

West Ham inflicted a fourth Foxes loss in five Premier League matches with goals in each half from Joao Mario and Mark Noble, the Hammers captain scoring a possible goal-of-the-season contender.

The win moved David Moyes’ team six points clear of the bottom three and put a three-point cushion between Swansea and Huddersfield immediately below them.

The opening goal came after 34 minutes when Arthur Masuaku’s far-post cross from the left was controlled and knocked back into the six-yard box where Joao Mario simply tapped the ball home.

West Ham scored their second goal in the 64th minute and it was a strike worthy of settling any match. Joao Mario’s free-kick was cleared by Dragovic as far as Noble, who struck the ball first time from 25 yards out and his shot flew into the bottom corner of the net.

The closest Leicester came to a reply was when Yohan Benalouane’s late header was pushed away by Adrian.

Argentine midfielder Roberto Pereyra scored the opening goal and set up the second as Watford beat Newcastle United 2-1 to secure their top-flight status for next season.

Watford got off to a flying start with a clever pass from Abdoulaye Doucoure allowing the unmarked Pereyra to score within the first two minutes. The Argentine assisted Andre Gray’s header in the 28th minute to double the hosts’ lead.

Striker Ayoze Perez scored 10 minutes into the second half to give Newcastle some hope of a comeback win and the much-improved visitors piled on the pressure in search of an equaliser but Watford held on to win their final home match of the season.