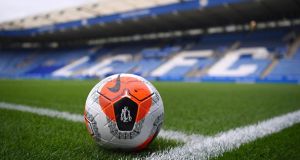 Leicester City and Manchester United will battle it out for a Champions League place on the final day of the season. File photograph: Getty Images

Liverpool might’ve sealed the Premier League title with seven games to go, but there’s still plenty to play for at both ends of the table ahead of the final Sunday of the season.

Chelsea, Leicester City and Manchester United are all fighting for the final two Champions League places. Tottenham and Wolves are both contesting sixth place and guaranteed qualification to the Europa League, although finishing in seventh could still prove enough.

While down at the other end and West Ham’s draw with United on Monday means they are now certain of staying up, leaving Aston Villa, Watford and Bournemouth to battle it out for survival on the final day. Norwich are already relegated following last weekend’s home defeat to West Ham.

Aston Villa travel to West Ham on Sunday knowing they are safe as long as they can match Watford’s result — unless both teams lose and Bournemouth win. Dean Smith’s side have found some form at a crucial moment and are unbeaten in three as they try to save themselves.

Watford make the short trip to the Emirates to face Arsenal knowing that if Villa win they must better their result by two or more goals, though if Villa draw a Watford win keeps them up, and they can afford a draw if Villa lose.

Bournemouth go to Everton knowing they have to win to have any chance of staying up, and even then it will only work out for Eddie Howe’s side if both Villa and Watford lose.

If the points are level, goal difference comes into play, and if that too is level it comes down to goals scored. As it stands, Villa have scored 40, Bournemouth 37 and Watford 34. If necessary, it could then go to head-to-head record, or beyond that, the unlikely scenario of a play-off behind closed doors.

United’s draw on Wednesday night moves them to third, ahead of Chelsea on goal difference and one point above Leicester. They need only a point in their final game against the latter to guarantee a top four finish. If they lose, and Chelsea lose, they will stay ahead of Frank Lampard’s team as their goal difference is substantially better.

Following their 5-3 defeat at Anfield, Chelsea need a point from their final match against Wolves to be certain of a top-four spot. If they lose but Leicester also fail to win, they will still qualify for the Champions League.

Leicester have been cursed with injuries since the league’s resumption and they have suddenly dropped from third to fifth. They must beat Manchester United at the King Power Stadium to finish in the top four places.

The fifth placed team in the Premier League qualifies for the following season’s Europa League, as do the FA Cup and League Cup winners. Manchester City won the latter, and as they are already certain of a top four finish they give that Europa League slot to the sixth placed team.

Arsenal can no longer qualify for Europe through the league but if they win the FA Cup they’ll be in next season’s Europa League. However if they lose to Chelsea in the final - who are already guaranteed European qualification - then seventh place will also qualify for the Europa League.

Wolves are currently in sixth, one point ahead of Spurs and both have a single game remaining. Spurs’ goal difference is one better, so if they win or draw against Palace and Wolves lose to Chelsea they will take sixth.

If any of them do so without finishing in the top four, then a maximum of two English teams can qualify for the Europa League (fifth and sixth) and five will enter the Champions League.