Derry City blow away any relegation fears at breezy Brandywell 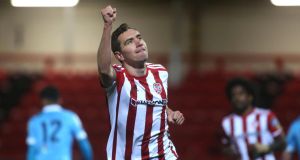 Derry City put any relegation worries behind them following this thoroughly deserved victory over Shelbourne at a breezy Brandywell.

The win moves Declan Devine’s side up into fifth spot in the table and after what has been a particularly inconsistent season, the Foyleside club will be relieved to have recorded a victory in their final game at home in the league.

And the men from Drumcondra can have few complaints having failed miserably to seriously trouble Derry goalkeeper Peter Cherrie.

However, given that Ian Morris’s charges had already consolidated their Premier Division status following this season’s promotion, the defeat will have mattered little.

With the strong breeze rendering fluent football almost impossible, the home side more or less controlled this fixture, having bossed the ball.

They issued a statement of intent from the kick-off with central midfielder Adam Hammill crashing a shot off the Shelbourne crossbar during his side’s first attack.

And when fellow Scot Cameron McJannett went close with a low shot following a corner, a determined home side did well when playing against a very strong breeze.

Derry were rewarded for their efforts when breaking the deadlock in the 19th minute. Having worked the ball out to the right flank, Jack Malone did well to set up Joe Thomson to guide it past the advancing Shels goalkeeper Jack Brady.

Shelbourne upped their efforts following the goal but their only threat during the first half centred on a Mark Byrne shot which was directed straight at Cherrie.

With the breeze clearly spoiling the game as a spectacle, Derry should have doubled their advantage in the 62nd minute.

Malone was sent scampering clear on the right and his threatening cross to the back post was forced wide by Stephen Mallon when the substitute really should have done better.

However, Derry did net a much sought after second goal in the 66th minute.

The hard-working Hammill got in behind the Shels defence and his low delivery across the face of goal was turned home by Walter Figueira, the Londoner making no mistake from inside the six-yard box.

Shels sub Jaze Kabia brought the best out of Cherrie during the latter stages but the Derry goalkeeper did well to parry the effort over this crossbar.