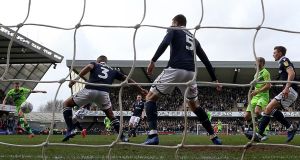 Norwich maintained their bid for automatic promotion with a 3-1 win at Millwall to return to the top of the Championship.

After being knocked off top spot by Leeds following United’s 4-0 win over West Brom on Friday night, the Canaries responded in fine fashion.

City opened the scoring in the 16th minute, with Marco Stiepermann firing into an unguarded net from 12 yards after Jordan Archer had saved a shot from Onel Hernandez.

The Lions levelled just before the interval, Republic of Ireland midfielder Shaun Williams heading home his seventh goal of the season after Steve Morison flicked on a corner with his heel.

But Norwich wrapped up the points in the second half with goals from Christoph Zimmermann and Teemu Pukki, the latter scoring his 24th in the league this season.

The result of the day was at Villa Park where Aston Villa, who had won just one of their previous 10 league matches, hammered Derby 4-0.

Cork midfielder Conor Hourihane opened the scoring after nine minutes before Villa ran riot at the end of the first half with three goals in eight minutes.

Tammy Abraham first tapped home his 21st of the season before unselfishly teeing up Hourihane for his second and Villa’s third soon after.

In injury time Jack Grealish, after three months on the sidelines with injury and captaining the side for the first time, thundered home a stunning volley to hand the Rams a third straight league defeat.

Two goals from Jarrod Bowen, taking his tally to 18 for the season and 14 in his last 16 games, continued Hull’s push for a playoff place as the Tigers beat Birmingham 2-0 at the Kcom Stadium.

Feeding on a through-ball from Marc Pugh, Bowen stroked home the opener in the 23rd minute before adding a 60th-minute penalty after he had been brought down by goalkeeper Lee Camp.

Nottingham Forest’s playoff hopes suffered a blow with a 2-0 defeat at Stoke where Peter Etebo and Benik Afobe were on the scoresheet.

Neal Maupay made it 20 goals in the league this season, stroking home a 50th-minute penalty after Grant Hall had brought down Ollie Watkins before the French striker then teed up Said Benrahma for the second in the 71st minute. Sergi Canos completed the scoring deep into injury time.

Relegation-threatened Rotherham secured a precious 3-2 win over Blackburn at the New York Stadium.

After drawing their last five, and with only one win in their previous 18 in the league, the Millers grabbed a second-minute lead when defender Semi Ajayi headed home a long throw from Will Vaulks for his second goal in two matches.

Although Blackburn equalised in the 51st minute through Amari’i Bell, the home side regained the lead six minutes later, with substitute Ryan Williams on hand to turn home a Vaulks cross before Ajayi headed home his second in the 84th minute. Charlie Mulgrew got Rovers’ second with an injury-time penalty.

Ipswich remain rooted to the foot of the table after losing 2-1 to fellow strugglers Reading at Portman Road.

Nelson Oliveira made it three goals in six games following his loan move from Norwich in January, rifling a fierce shot into the top corner in the 19th minute to put the visitors in front.

Town seemed to have rescued a point when Gwion Edwards volleyed in from a narrow angle seven minutes from time, only for Mo Barrow to give the Royals the win with a fine late finish.

Nine-man Bolton crashed to a 2-0 defeat at Swansea to increase their relegation fears.

After Remi Matthews had saved a poor Oli McBurnie penalty in the 36th minute – his second miss from the spot this season – Bolton went into the break down to 10 men.

Craig Noone, who had been booked in giving away the spot-kick, was shown a second yellow two minutes before the break for a poor challenge on McBurnie.

David Wheater was then shown a straight red in the 73rd minute for a deliberate foul on Wayne Routledge, with McBurnie and Bersant Celina capitalising to give the Swans the win.

Middlesbrough missed the chance to close on the top two after they were held to a goalless draw at Wigan, while fellow playoff hopefuls Bristol City could only draw 1-1 at Preston. Daniel Johnson rifled home the opener three minutes before the break, but Famara Diedhiou grabbed a point for the visiting Robins in the 69th minute.

Five Golf Classics for you to tee up at in 2020 06:00
Out of the shadows: Floodlights a priority for clubs across Ireland 06:00
AFL’s equalisation policies a possible guide for the GAA 06:00
Murphy confident Donegal remain on the right track 06:00
Caelan Doris and Ronan Kelleher make strong case to start against Italy 06:00