Leeds return to the top after blitzing the Baggies 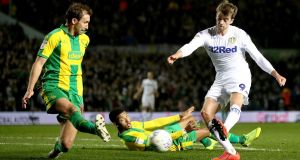 Leeds United returned to the top of the Championship with an emphatic 4-0 victory over West Bromwich Albion, sealed by Pablo Hernandez’s first-minute strike, a Patrick Bamford double and Ezgjan Alioski’s late tap-in, enough to see Marcelo Bielsa’s side leapfrog Norwich and Sheffield United at the summit.

If Leeds were in need of a pick-me-up after their surprise midweek defeat at QPR (their fifth loss since Christmas) left them outside the automatic promotion places, they could barely have got it any quicker at Elland Road.

Hernández opened the scoring after just 16 seconds, with his drive from 25 yards whistling beyond Sam Johnstone in the West Brom goal after Jack Harrison’s fine surge down the left.

His side’s inconsistent form since the turn of the year meant before this fixture Bielsa had to field questions on whether, given their high-energy approach, his side had the stamina for the promotion race.

But there was no sign of any fatigue on this occasion. Leeds were dominant and before the half hour they had doubled their advantage, Bamford calmly finishing from close range after a neat buildup.

Albion’s home defeat to Sheffield United last Saturday left them in fourth place, playing catch-up in the promotion race, and they have been reliant on their excellent away record to compensate for their disappointing form at the Hawthorns.

There was no respite on this away trip, though – Darren Moore’s side were second best throughout. Jay Rodriguez forced Kiko Casilla into a fine save with a fizzing shot from distance in the first half and Hal Robson-Kanu nodded over the bar from Gareth Barry’s inswinging free-kick early in the second but it was a chastening evening for the visitors.

Midway through the second half Leeds made the points safe. Tyler Roberts drove forward and fed Bamford, whose shot deflected low past Johnstone off the unfortunate Craig Dawson. And in injury-time Alioski finished off another slick move to add the fourth.