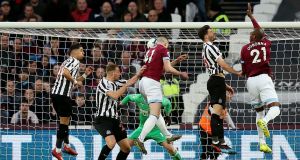 West Ham tore apart Newcastle with a blistering first-half performance when a header from Declan Rice and a Mark Noble penalty set up their win at London Stadium.

Even though Newcastle began as the form side, with four league wins from six, their challenge effectively lasted just seven minutes – the time it took Rice to score the opener.

The 20-year-old muscled himself into space to head Robert Snodgrass’s corner powerfully past the goalkeeper for his second Premier League goal.

The home side survived the disruption of an injury to Aaron Cresswell, who was replaced by Arthur Masuaku, to extend their lead from the spot after Florian Lejeune brought down Javier Hernandez just before the break.

The ever-reliable Noble rifled his shot high into the corner for his 19th successful penalty for the club out of 21.

Although Newcastle improved after the break, when Paul Dummett came on in a rejigged formation, they seldom threatened beyond a Salomon Rondon shot that hit the post late on. The win moved West Ham to ninth in the table.

Wolves put their recent shaky Premier League form behind them to ease past Cardiff City 2-0 at Molineux on Saturday and leave the Welsh team in the relegation zone after a third straight defeat.

Desperate for a win to help their quest for Premier League survival, Neil Warnock’s side started strongly with plenty of possession and could have had the first goal when Wolves goalkeeper John Ruddy fumbled the ball on the line from a corner.

But Nuno Espirito Santo’s Wolves showed why they are seventh in the Premier League, quickly imposing their fast-breaking and slick-passing game in front of an appreciative crowd of 31,309.

Portuguese striker Diogo Jota smashed in the first goal from close range in the 16th minute after great link-up play and an assist by fellow forward Raul Jimenez. Two minutes later, Jota repaid the favour, laying up the ball for Jimenez to fire into the bottom left-hand corner for 2-0.

Wolves, who squandered numerous chances for a bigger scoreline, needed the result after a surprise mid-week defeat at Huddersfield and two draws in their previous Premier League outings. Cardiff now sit third from bottom, with 10 goals conceded in their last three games.

The gulf between the teams was illustrated in the first half when Jota cheekily put the ball between the legs of Cardiff’s burly Icelandic midfielder Aron Gunnarsson, who looked bemused.

Crystal Palace moved further away from the relegation zone with a 3-1 win at fellow strugglers Burnley on Saturday thanks to second half goals from Michy Batshuayi and Wilfried Zaha.

Palace took the lead in the 15th minute when Jeffrey Schlupp’s pull-back struck Burnley defender Phil Bardsley and ricocheted into his own goal.

Burnley dominated the rest of the opening half with Chris Wood forcing a fine reflex save out of Wayne Hennessey with a fierce shot and the Clarets peppering the Palace box with crosses from deep.

But three minutes after the re-start, Palace struck again when full back Aaron Wan-Bissaka’s pass was blasted home, first-time, by Batshuayi.

The game was wrapped up in outstanding fashion by Zaha who tormented the Burnley defence, twisting inside and out, before firing a low shot past Tom Heaton.

An Ashley Barnes header gave Burnley a late consolation and although subtitute Peter Crouch went close to a second, Palace’s lead was never in real danger.

A 79th-minute header from Florin Andone secured Brighton’s first Premier League win of 2019 as they beat seemingly doomed Huddersfield Town 1-0 to stem their recent slide down the table.

Andone rose to meet Anthony Knockaert’s chip to power home from near the penalty spot just when it looked like Brighton’s familiar failings in front of goal might again deny them.

Before the game, locally-born world boxing champion Chris Eubank Jr was introduced to the crowd in the hope that he would inspire a fighting performance from a side who had secured just two points since the start of the year.

But Brighton again struggled for a knockout blow in a lucklustre first half with Iranian Alireza Jahanbakhsh providing the only excitement when his 41st-minute shot fizzed against the bar.

Huddersfield, who beat Wolves in midweek, were forced into a change with Aaron Mooy replacing the injured skipper Jonathan Hogg.

The Australian had little chance to shine as Brighton cranked up the pressure after the break with Andone having one effort well saved by Jonas Lossl before he finally beat the goalkeeper for the win that moves Brighton five points clear of the drop zone.

Huddersfield remain adrift at the bottom, 13 points behind 17th-placed Southampton.