Safety first as Premier Legaue juggernaut cranks back up

For all of the disquiet, it is impossible not to feel fascinated by the upcoming prospect 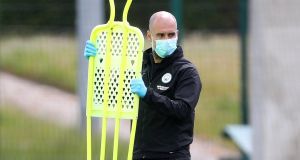 Well, here we are again. Fire up the celebration-cam. Unleash the crowd noise algorithm. Daub those exposed extremities with rubbing alcohol. The return of the Premier League tonight may technically be a resumption, conclusion to a season that began 10 months and one global health trauma in the past. In reality it feels like something self-contained and entirely other.

Welcome to football as a high-speed entertainment product, sealed within its bubble, zooming off towards the vanishing point. Welcome to 92 live games in six summer weeks, to deserted stands, video walls and the strangling of the post-match quotes industry. Welcome to the new abnormal normal.

And yet for all the disquiet in getting to the start line, it is impossible not to feel fascinated by the prospect. There will be glimpses in the weeks to come of how this overblown but oddly indestructible sport might look in the near future. Who knows, it might just all turn out to be quietly uplifting.

It is significant how quickly this has changed. Before thepast two weeks, the prospect of the Premier League returning still felt odd and rather brutal. It seemed absurd to many people that something as trivial as a game of football should be a first step in testing the limits of normal society – like sending a mariachi band first out of the nuclear bunker to report on radiation levels and the presence of zombies.

But here we are, restarting under conditions that make the rest of society look a little reckless by comparison. In the Premier League’s version of reality, players will stick to a “sterile route” on matchdays. Red-zone passports with up-to-date testing will be required to enter the shared areas. In the media zone only those submitting to temperature tests, a health quiz and compulsory face coverings will be admitted.

Meanwhile, regular British citizens are flying in planes, disgorging into retail parks, engaging in mass hand-to-hand combat with strangers and queueing back to the mini-roundabout for sugary cheeseburgers. In this context the idea there is something inappropriate about the profitable parts of football resuming has, frankly, gone out of the window. This is an industry that generates pay cheques and fond escapism. Both of these are quite welcome right now.

At which point it is probably time to talk about the football. What will we get over the next six weeks? A common first response to the rejigged summer format was a fear the Premier League would be serving up seriously weak gruel: interrupted, disassembled teams seeing out the fag end of a bitty, transitional season for many clubs. This may have been true in March. There will still be no title race: Liverpool, champions of Europe, have been astonishingly good, while everyone else has been so-so. But for the rest of the division this is a do-over, football in space, without gravity or the sound of explosions, sealed within its airlock.

The points-split of the top five teams means the race for the Champions League could still fizzle out in the space of three fixtures. But should Manchester City’s European ban be upheld by the Court of Arbitration for Sport – and right now it is in effect – the last 10 games will have eight clubs within six points of fifth place and Champions League qualification.

This comes at a time when, frankly, anyone can beat anyone, when form has disappeared and when some players and teams will undoubtedly benefit from a complete 90-day break, for many the first since the start of their professional careers.

The idea of Crystal Palace surging up the table to edge out Manchester United from the Champions League may seem a fanciful outcome. At which point, sceptical reader, I refer you to the year 2020: outline plot so far.

As for City themselves, the return of Aymerick Laporte will strengthen every part of the team, from defence to midfield to basic passing patterns. Leicester should be fine. A lean first-team squad has had time to rest. The same probably goes for Chelsea, also patchy since the turn of the year.

Against this, Arsenal, Manchester United and Tottenham may all expect to finish strongly. It is easy to forget that José Mourinho was appointed Spurs manager in November, just as the first Covid-19 cases were being reported in Wuhan province (the two are not connected). Harry Kane, Son Heung-min and Moussa Sissoko are fit.

The Mourinho style, whatever that may actually be these days, has had an extended pre-season to bed in. Arsenal have had the chance to enact a similar process with Mikel Arteta. Neither have much to lose, but 10 games to win. Downtime has invigorated seasons that were drifting.

Manchester United are also at a fascinating stage, unbeaten since January and with Paul Pogba, Scott McTominay and Bruno Fernandes a potentially mouthwatering midfield. Below them Wolves and Sheffield United are both in with a shot of European football.

Stretch down to the bottom third and there is a potentially fraught relegation fight between five clubs separated by four points. From a standing start pretty much anything could happen down there.

Beyond this there is the suspicion that the summer festival might lead somewhere else, one step nearer perhaps to some kind of Super League or Club World Cup. Certainly some of those old certainties will seem a little less carved in rock.

As a sign that nothing is off the table, the Premier League has even grown a political conscience, attaching itself tenaciously to the Black Lives Matter movement, albeit on grounds this is a human rights not a political issue. In reality, player pressure has brought this about and all credit to those responsible. As for politics, well, this is clearly hogwash: racial inequality is one of the dominant political issues of the age. Quite how close a Premier League built on unregulated capitalism and money from all-comers wants to stand to that fire remains to be seen.

For now we have something else, something clear and oddly distinct, a league that has been revealed by those 90 days in the wilderness to be all business, to be heavily in hock to its own spending; and also, by the end, to be reassuringly indispensable. – Guardian