Michael Obafemi crashes Chelsea back down to earth 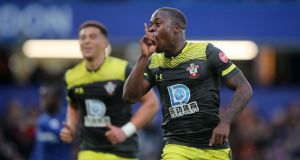 Chelsea had been flying after their victory at Tottenham Hotspur on Sunday, which felt like a defining moment for Frank Lampard and the evolution of his young team. This was a crash back down to earth, further evidence of the London club’s maddening inconsistency.

Southampton’s win was perfectly judged and entirely merited, ignited by a special first-half goal from the 19-year-old Irish attacker Michael Obafemi and driven by their second-half threat on the break. Nathan Redmond scored the goal that made the points safe – he was a thorn in Chelsea’s side – but this was a team triumph, built on the firm central defensive contributions of Jack Stephens and Jan Bednarek. The midfielders, Pierre-Emile Højbjerg and James Ward-Prowse, were also excellent.

Chelsea have now lost three of four Premier League games at home, this one following those against Bournemouth and West Ham United – and they have drawn blanks on each occasion. Their inability to prise Southampton apart was a huge concern and, although they remain fourth in the table, it is stating the obvious to say that they must do better against teams much lower down.

Southampton’s away form has been better than their home form – they always tend to score on their travels – and, when they did so for the first time here, it was a goal to blow away the cobwebs. It had been an attritional start but Obafemi injected pace and incision in a stunning cameo that had Ralph Hasenhüttl jumping for joy.

The Southampton manager had started with Obafemi and Che Adams up front in his 4-4-2 system; Shane Long was injured and, with one eye on Saturday’s home game against Crystal Palace, he decided to use the in-form Danny Ings only as a substitute.

The decision enjoyed a dividend after Højbjerg fizzed a low pass to Obafemi, which reached him after Fikayo Tomori’s failed attempt to intercept. Southampton had won the ball from Callum Hudson-Odoi on the touchline by halfway, mobbing him as he tried to play and, once Obafemi had his head up and the afterburners on, the alarm bells sounded for Chelsea.

It was the purpose with which Obafemi sliced inside, showing lovely balance and taking him away from Kurt Zouma, that opened up the shooting chance and the question was whether he could execute the left-footed curler into the far corner. The answer was an emphatic yes. It was only Obafemi’s fourth Premier League start. His second goal in the competition was a beauty.

Southampton’s formation was designed to be difficult to break down with them leaving precious little space in between the lines. Their work rate was prodigious and Chelsea endured plenty of frustration. They fed off scraps in the first-half and on the only occasion that Alex McCarthy was forced to work in the Southampton goal, tipping away from César Azpilicueta’s near-post flick after a Willian corner, the effort was going wide anyway. Hudson-Odoi had a shot blocked by Jack Stephens; Tomori headed weakly after a short corner routine and Hudson-Odoi was guilty of a poor cross when well-placed.

Lampard had stuck with the 3-4-3 system that added up to a tactical masterclass at Spurs. It did not work at all on this occasion and he switched to a back four at the interval, introducing Mason Mount in an attacking midfield role and sacrificing Zouma.

Chelsea looked more urgent with Mount on the pitch and they pressed on to the front foot but it was Southampton who carried the greater threat on the counter, where Redmond’s pace was a weapon. Redmond was denied one-on-one by Kepa Arrizabalaga on 65 minutes, which felt like a massive moment while he had previously beaten Antonio Rüdiger to cross low for Adams at the far post. Tomori stretched to toe the ball away.

Redmond would not be denied and his goal came after a long and impressive sequence of passes from his team. Stuart Armstrong tried to get away from N’Golo Kanté only for the Chelsea midfielder’s challenge to send the ball over to Redmond at the far post and, when the winger got to it before Arrizabalaga, he guided home smartly.

Chelsea offered no more than flickers in the attacking third in the second-half, with Tammy Abraham shooting into the side-netting and the substitute, Christian Pulisic, and Mount testing McCarthy. Hasenhüttl’s celebrations at full-time showed what this win meant.