Martial, Greenwood and Rashford too hot for Newcastle 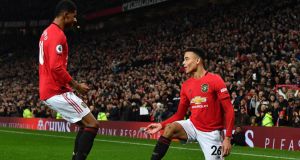 Manchester United again illustrated their Jekyll and Hyde character by rebounding from Sunday’s dismal defeat at Watford with this smooth-geared, canter of a victory.

Ole Gunnar Solskjær’s side even gave Newcastle United the advantage of a goal lead during a dire few first- half minutes before upping quality and control to pull away and display a ruthlessness they sometimes lack.

Solskjær dropped Daniel James and Jesse Lingard for Andreas Pereira and Mason Greenwood, while Steve Bruce made four changes, of which two were Sean and Matty Longstaff who were in the XI that triumphed in October’s reverse fixture, the latter scoring the winner.

Solskjaer entered the match again talking of how the 2-0 defeat at Watford was down to his team’s callowness and the ensuing 90 minutes bore this out. A Marcus Rashford free-kick that was deflected led to three successive corners and now came United’s blip. The last of the kicks was claimed back by the visitors and suddenly Dwight Gayle and Jetro Willems were involved in a breakaway that Aaron Wan-Bissaka was relieved to foil with a spidery leg just outside his area.

There was similar emotion when Greenwood lost the ball inside the Newcastle half and again they charged through. This move ended with Joelinton feeding Gayle and he should have scored from close range.

There was no escape the third time as Matty Longstaff repeated his feat of two months ago. Yet again the home side were slipshod: this time Fred was dispossessed with ease and black-and-white shirts flooded forward. Gayle fed the younger Longstaff and he chipped sweetly into Joelinton who returned the ball – under extreme pressure – for his teammate to slide home.

Manchester United had only themselves to blame for a sequence in which they were asleep on the job. They woke up quickly as they had to, though Martin Dubravka will not wish to see replays of how Anthony Martial’s equaliser squeezed in at his near post. This came after Rashford and Luke Shaw combined along the left before the latter found Pereira. His layoff was smart as it allowed Martial to shoot but Dubravka should have beat it out and not in.

The already noisy home fans ratcheted up the volume in celebration of Martial’s eighth in 18 appearances and Newcastle were now on the back-foot. They were being stretched along the flanks and it was from the left one Rashford let fly in what was a warning to Bruce’s team.

Solskjær has spoken recently of the difficulty of leaving Greenwood out and the 18-year-old was about to show why. When Fabian Schär passed loosely Greenwood pounced on the ball, advanced, then fired a rocket that deflected off Federico Fernández and rebounded in from the bar. Cue the boy from Bradford celebrating with a knee slide and his team-mates mobbing him.

Manchester United threatened further via a Pereira shot and a Greenwood cross before striking again. This time Wan-Bissaka stood the ball up and Rashford hung high in Cristiano Ronaldo-style, outmuscling Schär, then powering in a magnificent header. VAR checked for a Scott McTominay hand on Matty Longstaff but the goal – correctly – stood.

For the second half Paul Pogba - who asked his teammates to wear “We are one” and “No to racism” wrist bands during (and solely for) the pre-game warm-up – was sent on in place of McTominay, who had previously taken a knock. The Frenchman’s opening action was a crafty dummy that allowed the ball to roll to Martial in the area, the former’s presence suggesting he could help put the result beyond doubt for his team.

A 20-yard Pogba shot that narrowly missed the inside of Dubravka’s right post solidified this sense and, moments, later United had a fourth goal for only a second time in the league this term.

Again this was self-inflicted from Newcastle: Sean Longstaff swivelled near halfway and hit the ball back but only into Martial’s path. He sprinted in and despite a heavy touch dinked home over the advancing Dubravaka.

Manchester United were now rampant. Pogba’s balletic feet created space but his left-foot shot was too close to the Newcastle goalkeeper. Next, Pogba threaded the ball to Martial and his effort with the same boot pinged from the left post.

By the closing stages both Rashford and Martial had been substituted and Greenwood operated as the centre-forward as he did in the win over Tottenham Hotspur here.

After Harry Maguire advanced and took aim it was chiefly an exercise in keep ball for Solskjær ’s team.

They are next at Burnley on Saturday. Who knows which of their two incarnations – poor or convincing – will turn up at Turf Moor.