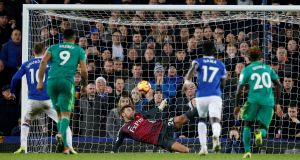 Watford manager Javi Gracia admits conceding a last-gasp equaliser to Everton was difficult to take — especially after their hosts had gone ahead thanks to an offside goal.

The Hornets appeared to be on the way to their first win in five league matches and an historic maiden win at Goodison Park until left-back Lucas Digne scored his first goal for the club with a free-kick in the sixth minute of added time.

Gracia had seen his side turn things around after Richarlison’s first-half opener, achieved with the contribution of Theo Walcott from an offside position, with Seamus Coleman’s own goal followed by Abdoulaye Doucoure in the space of three second-half minutes.

When Ben Foster saved Gylfi Sigurdsson’s penalty moments later it appeared Watford were on their way to joining the seventh-placed Toffees on 23 points only for victory to be snatched away.

“It was tough to accept because after having a good reaction after conceding a goal in the first half, I think we have played much better,” said Gracia.

“The second half was better but if you are in the same position as the players, it is difficult to accept the result.

“A goal in offside position was not easy to accept but they kept the confidence and attitude and the second half was better.

“It is offside. I prefer not to say anything about the referee’s decision.

“It was a bit frustrating but if we keep playing this way and I am sure we will get better results.”

Gracia was seen speaking to Richarlison, whom he sold to Everton in the summer for £40million, at the final whistle.

When asked what he said the Watford manager replied: “I told him it was the first goal I see (from him) because last season he didn’t score one goal for me - but then I wished him the best.”

Everton boss Marco Silva, who remains the subject of a dispute between the two clubs after Watford accused the Toffees of an illegal approach a year ago, was also dissatisfied at the final whistle.

“I am not happy. When you start like we start and we achieve just one point of course we are unhappy with the result,” he said.

“We could not put our quality in the second half on the pitch and we completely lost the focus and conceded the two goals.”

Sigurdsson has now missed two of his last three penalties and Silva was asked whether the Iceland international would remain on spot-kick duties.

“Let’s see what will be my decision. If I change something our players will know first. It doesn’t make sense if I tell you tonight.”