Better recruitment needed, whether or not the club has Champions League revenue 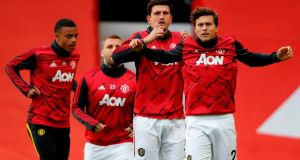 Naturally, the jokes were not long in coming. Paul Pogba: the solution to Manchester United’s goalkeeping problems. A better reaction save than David de Gea has managed all season. If it wasn’t humour, it was blind fury.

“It’s rubbish from him, embarrassing,” Gary Neville chided on Sky Sports. “You’ve got to take that in the face,” James Collins agreed in the studio. And as a tired Manchester United stumbled at home to West Ham, putting their Champions League participation next season in doubt, Pogba felt like a very convenient scapegoat for a team whose current problems go plenty deeper than one pair of wandering hands and one instinctive handball.

For what seems to have been forgotten in all the righteous fury about Pogba’s supposed act of cowardice, throwing his hands up to block Declan Rice’s wayward shot, was how the opportunity had arisen in the first place: a free-kick given away by Timothy Fosu-Mensah’s wild lunge on Michail Antonio, who had found some space on the edge of the penalty area. And more generally, the culmination of a sustained spell of West Ham pressure, the sort to which United, for all their attacking bravado, still seem worryingly susceptible.

This, in many ways, was the real story of the game: a limited West Ham side testing United again and again, scenting their weaknesses and growing in confidence as the match progressed. Remember that famous game in 2014 when David Moyes was managing United and they put in a staggering 81 crosses, most of which ended up getting headed away by Dan Burn? Imagine that, but with United on the receiving end and without Dan Burn to head them away.

Right now, crosses are United’s kryptonite. They can’t stop them and they certainly can’t seem to defend them. The warning signs were there early on: the defence simply watching as a free-kick from Aaron Cresswell pinged unimpeded through the six-yard box; the exhausted-looking Bruno Fernandes flicking a corner straight across his goalmouth; Brandon Williams getting a rough ride from Jarrod Bowen on the West Ham right. Great sides don’t do this.

Ironically, perhaps the best-performing member of United’s back-five was the much maligned De Gea, who had little to do but did it well. Perhaps fatigue was something of a factor , the tired legs and tired minds of a team playing its 10th game in just over a month with little rotation. But it was also impossible to shake the suspicion that United’s defence is their weakest link, that without significant reinforcements all talk of a title challenge remains entirely theoretical.

Partly, this is a question of personnel. Williams, for all his attacking urgency, is still some way short of a first-choice. The decision to bet the house on Harry Maguire remains largely unsubstantiated. De Gea’s troubles have been well-documented. And deep down you wonder how much Ole Gunnar Solskjær really rates Aaron Wan-Bissaka, even if his absence on Wednesday was attributed to a minor injury. For all the strides he and Luke Shaw have made in the past year or so, United still look a little underpowered at full-back.

But this is also a question of approach and balance. After all, defence is only one aspect of a team’s defensive output and the more pressure you invite, the more likely you are to crack under that pressure. Without the double-pivot of Fred and Scott McTominay, United still struggle to prevent teams from playing through them, as West Ham proved time and again.

After a cagey opening 20 minutes, West Ham seemed to realise around the time of the first drinks break that United were there to be got at. This is the other aspect of the problem: the more frail you look at the back, the more you embolden the opposition to attack you. United’s strategy of dominating possession and undoing teams with quick passing and movement will only work as long as they can shut the door at the other end.

Naturally, any talk of reinforcements is liable to be met with a snort of derision, with retorts of Alexis Sánchez and Matteo Darmian and Morgan Schneiderlin and Ángel Di María and all those famous transfer blunders of the past. But recruiting badly isn’t an argument to stop recruiting; it’s an argument to recruit better. Whether it’s the tiring front-five or that raw, soft-bellied defence, United will need to invest heavily this summer, whether or not they have Champions League revenue. - Guardian