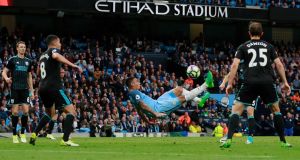 Manchester City have only to avoid a heavy defeat at Watford to secure a Champions League place on the season’s final day.

On a night marked by Pablo Zabaleta’s last home outing, this equation was the result of a victory that stretched City’s goal difference to five better than Arsenal, who also beat Sunderland. If Watford can be defeated then Pep Guardiola’s men will claim a third position in his inaugural campaign that means entry to the Champions League at the group stage.

Guardiola made two changes, dropping Gaël Clichy for Aleksandar Kolarov and Raheem Sterling for Sergio Agüero, each of these players among the night’s replacements. Tony Pulis had last overseen a league win a month ago when West Brom defeated Arsenal. This meant a run of two points from seven games. He made three changes. From the XI that lost at Chelsea out went Gareth McAuley, James McClean and Sam Field. In came Claudio Yacob, Marc Wilson and Nacer Chadli.

City began their mission to claim all three points in a formation that had Agüero at the tip and Gabriel Jesus on the right of the three behind. On 11 minutes came a song of “Stand up if you love Pablo” and the Etihad rose to hail the right-back. Next the home fans appealed to Craig Pawson for a penalty after Leroy Sané went down as Allan Nyom challenged him but the referee was unmoved.

Moments later came a collective “ooh” as Ben Foster was forced into a flying save from a fine Kolarov free-kick, before another glorious chance ensued. Guardiola greeted a hopeful Kolarov punt with frustration as it was hardly the composed pass-and-move stuff he prefers. Yet the ball came to Agüero who after a slip played the correct pass to Sané. The German advanced along his left-hand channel then shot but missed, heightening Guardiola’s annoyance.

City put together one sequence of percussive ball movement but as the half hour approached West Brom had managed to engage them in more hand-to-hand fare.

Yet apart from a Chadli free-kick that went straight to Willy Caballero the visitors failed to threaten. Instead, City took the lead via a slick move. Yayá Toure rolled the ball to Agüero, he flicked delightfully on to Kevin De Bruyne who after turning on the afterburners played in Jesus and he made no mistake.

The goal broke the contest open as City doubled their advantage 106 seconds later. Once again Agüero was involved as a link man, the ball passing through him before it eventually came to De Bruyne. The Belgian took aim and fired a rocket beyond Foster.

It was the kind of cut-throat quality Guardiola complains is missing from his side. So the manager will have been delighted, if possibly disappointed that this was only De Bruyne’s sixth league strike – a poor return from a footballer of undoubted class.

One of Agüero or Sané might have made it 3-0 to City at the interval but the former shot straight at Foster and the latter blazed over with his chance. Nevertheless, Jesus’s snap overhead effort typified the bright, inventive football City were playing.

Vincent Kompany had limped for some of the opening half following a tackle so it was good news for City that he emerged for the second period. While a cheer as loud as those that followed each goal greeted Zabaleta’s trot along the touchline to warm up, Pulis waited only seven minutes to make a change, swapping Wilson for McClean. The visiting manager was prowling his technical area in constant-complaint mode. When Craig Dawson was booked for fouling Agüero Pulis’s ire kicked into overdrive and if Kompany had managed to finish the resulting free-kick who knows how he would have reacted.

City soon scored again, though, and it was simple. Touré played a one-two with Agüero, who again dinked a superb pass on, and the Ivorian moved forward and slotted past Foster.

It was a seventh goal in 30 appearances from a player who has become integral since apologising to Guardiola for the words of his agent.

At 3-0 up the City fans could relax and sing “we want Pablo”, and on the hour the fans got their wish. When Kompany was taken off Zabaleta was handed the armband in what was a classy touch. There was also a cuddle from David Silva and particular merriment when Zabaleta upended Salomon Rondon. The old warhorse will have enjoyed watching De Bruyne, Silva, Sane and Jesus torment the Baggies.

Hal Robson-Kanu added a late consolation for West Brom but City attacked when they wished and wherever Zabaleta goes will surely not operate behind as fine a frontline as this. Now, the whole side has to complete the job on Sunday.