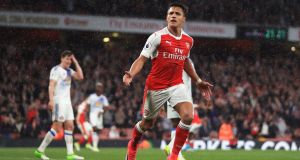 It has been a long and arduous season for Arsène Wenger and Arsenal, underpinned by hostility and a basic lack of any real sense of enjoyment. And yet it still has a pulse. The team continued their recent surge, digging deep to overcome obdurate opponents in Sunderland, and they will go to the final day of the Premier League season on Sunday still hoping for the twist that could put a more positive spin on things.

They need a miracle. Or, to put it another way, they need Liverpool to drop points at home to Middlesbrough or Manchester City to be thrashed at Watford which, coupled with a home win for them over Everton, would allow them to snatch a Champions League place. Wenger will believe that his proud record of top-four finishes is not yet dead.

This was an evening when there were thousands of empty seats at the Emirates, reflecting the mood of frustration and, for so long, it looked as though Sunderland’s inspired goalkeeper, Jordan Pickford, would keep them at bay.

Alexis Sánchez had other ideas and it was his two goals that eventually broke Sunderland’s resistance. Both of them were converted from close range, the first after Mesut Özil had turned Granit Xhaka’s ball inside to him and the second following Pickford’s save from Olivier Giroud. Sánchez gobbled them up with glee. Could there yet be a sting to this saga on Sunday?

The scene at kick-off time had been shocking in terms of just how sparsely populated the stadium was. There were empty red seats everywhere and it did not seem overly generous to put the ground at two-thirds full. Many regulars could not remember a lower attendance. And this was for a must-win end-of-season game. In relation to the great Wenger debate, it felt as though the fans were voting with their feet. It should be added that the stadium did then fill up – a bit.

It was certainly a weird atmosphere, more in keeping, at times, with a pre-season friendly and, when the travelling supporters suggested it was a library, it was difficult to disagree.

Arsenal had to force the issue, with Sunderland happy to mass men behind the ball and look to punch on the counterattack. Jermain Defoe had Fabio Borini and Didier N’Dong working in support of him and the visitors had their flickers. Twice before half-time they got in on goal, following relatively straightforward passes, and on both occasions Petr Cech had to save.

First, on 34 minutes, Defoe fed N’Dong and, when the offside flag stayed down, he struck low towards the near post. Cech did well to turn it behind.

Moments later, N’Dong returned the compliment for Defoe, who shot across Cech for the far corner. The goalkeeper extended an arm to push it to safety.

Arsenal probed through Özil, Sánchez jinked and spun while Héctor Bellerín dashed up the right flank with purpose. But they fired only in fits and starts in the first half and it said much that their first moment of real excitement did not come until the 43rd minute, when Özil released Bellerín and, from a tight angle, he attempted to beat Pickford at the near post. The shot swelled the side-netting.

On the stroke of half-time, Aaron Ramsey swapped passes with Özil in a tight area and managed a volley that Pickford turned around a post. It was a fine save. From the corner, Rob Holding failed to generate sufficient power with a free header.

Arsenal could point to other moments from earlier in the first half but their play was short of cohesion and conviction. Sánchez had the ball in the net early on only for his shot to be called back following a handball by Giroud while Giroud was thwarted by Pickford after showing quick feet to collect a ball from Ramsey.

The first half was rather summed up on 41 minutes when Sánchez jinked one way and then the other in an attempt to shake off Billy Jones. After yet another shimmy, it looked as though he had got clear only for the defender to stick out a leg and swipe the ball away from him. The home crowd groaned.

The emotions churned inside the home supporters. As the second-half minutes ticked down, they tried to drive on their players – the atmosphere belatedly came to life – but there was also angst and anger. And, yes, moments of worry. Defoe’s movement was razor-sharp. Arsenal knew that they could not afford to give him a clear sighting of goal.

Why were Arsenal not putting the lowliest team in the division to the sword? In many respects, it was so typical of them. On the other hand, Sunderland fought like tigers, their doggedness epitomised by Jones and Lee Cattermole. Wenger’s pre-match comments about clubs with nothing to play going “on holiday” looked set to haunt him.

Arsenal’s nerves had jangled early in the second-half when Nacho Monreal erred with a loose backpass, which Cech would then handle to concede a free-kick on the by-line, five yards from goal. It came to nothing; the angle was impossible and David Moyes could actually smile on the touchline.

The home team laboured but Wenger’s double substitution helped turn the tide. He introduced Danny Welbeck and Alex Iwobi and switched to a flat back four. Welbeck would work Pickford and moments later, Sánchez made the breakthrough. Arsenal finished with a flurry and there were further chances for Xhaka and Iwobi. It was nervy but they got what they needed.