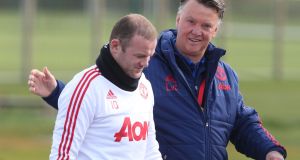 Wayne Rooney has returned to training, but will not be risked in Manchester United’s crucial trip to Tottenham.

A knee injury has kept the 30-year-old out for nearly two months, but the United captain is closing in on a first-team return.

Rooney this week took part in two training sessions as he stepped up his rehabilitation, although Louis van Gaal will not risk him at title-chasing Spurs on Sunday.

Instead, the England skipper will line up at Old Trafford on Monday as United’s Under-21 side host Middlesbrough.

“No (he won’t play at Tottenham), he’s playing for the Under-21s,” said manager Van Gaal.

“It’s going very well. He has trained with us two times — only two times so it’s not too much.

“He has to build up his capacity in the 21s team.”

A solid display for the under-21s could see Rooney feature in Wednesday’s FA Cup quarter-final replay at West Ham.

But Van Gaal may instead prefer to ease the forward back against embattled Aston Villa on April 16 — an option the Dutchman now has thanks to his injury problems alleviating.

Not so long ago United were facing an injury crisis, but they have very few problems to contend with as the season draws to a close.

“It makes my job more easy because I can select better, but it makes the time for my players a little bit more difficult,” Van Gaal said.

“There was a time when I could select only the fit players and now with all the youngsters, who have proved that they are capable to play, and with all the players coming back, now I have to select.

“I have a bigger squad so I have said to my players you have to help your colleagues when they are not selected.”

Rooney, Bastian Schweinsteiger, Luke Shaw and Adnan Januzaj are the only first-team absentees for a trip to White Hart Lane that is likely to go a long way to deciding both sides’ fate.

United head into the weekend fifth in the standings and just a point off Manchester City in the final Champions League spot, while Spurs need a win to kick-start their title charge.

“It is very difficult because the pressure is also for Tottenham Hotspur now because they have to close the gap on Leicester City.

“So it is in the same position more or less as Manchester United at this time and I think until this time Leicester City is in a very good position.”

Van Gaal has been as impressed as anyone by the Foxes this season, so too the work Mauricio Pochettino has done in north London.

The former Argentina international has brought style and substance to White Hart Lane, where he has successfully mixed home-grown talent with proven international players.

“I think they have a very good squad, I have said that also last year,” Van Gaal said. “I think he has made a team of this squad of individual players.

“They are pressing high, they are playing a very good positional game and they score goals, they score a lot of goals.

“They also have a lot of clean sheets, so it’s a very good team in organisation structures, so I think that you can give credit to Mauricio Pochettino.”

So good has the former defender’s job at Tottenham been that he has been touted as a serious contender to succeed Van Gaal at Old Trafford.

Speculation has been rife about the United manager’s position and this week reports suggested he had rejected an offer to become the Dutch Football Association’s new technical director.

“I don’t want to respond to these kind of questions because what I discuss with the federation, it has to be between the federation and me,” Van Gaal said.

“It is the same (reason) I don’t answer the questions about my discussions with the board of Manchester United.”

5 Jason Day remains in contention despite bizarre series of events