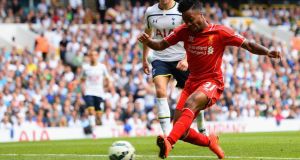 The Premier League has its reminder that Liverpool remain a potent force. That loss at the Etihad Stadium was exorcised here in thrilling fashion at a venue where they had plundered five last term, visiting players a blur of movement throughout against panicked opponents whose own encouraging start to the season has now been put in proper context. This was a satisfying way for Brendan Rodgers to celebrate a century of games in charge.

His team have the cluttered schedule of a Champions League campaign to come and, if their first two fixtures had suggested they were embroiled in a period of post-Luis Suárez adjustment, then this was them reimposing their credentials.

Tottenham Hotspur had never previously been hassled and harried like this under Mauricio Pochettino, the errors which undermined the hosts’ approach invariably forced by Liverpool snapping at their every move. Mario Balotelli did not have to inspire on debut. Spurs could be punctured by other means with Liverpool’s superiority pronounced.

The visitors dazzled at times, conjuring memories of their riotous win here last season when Suárez had revelled in a five-goal rout.

Raheem Sterling had also enjoyed himself that afternoon and was as scintillating again here, his darts into space from the tip of a midfield diamond a source of constant worry for Tottenham’s rearguard. The England forward plundered early, benefiting after Daniel Sturridge’s skill had teased space from Jan Vertonghen and Nacer Chadli and allowed him to liberate Jordan Henderson.

The midfielder clipped his centre across the six-yard box and Sterling finished neatly at the far post with Hugo Lloris helpless.

Sturridge subsequently forced the Frenchman into a save from distance, though the visitors’ best opportunities to extend their advantage before the interval fell to their Italian. Balotelli might have scored three minutes into his debut, connecting with a firm downward header from Sturridge’s cross only for Lloris to palm the effort away. The striker had registered on his first appearances for Inter Milan, Manchester City, Milan and the Italy under-21s but, while his work-rate and effort were impressive, his finishing remained strangely awry. This was not to prove a goalscoring start.

There was a free header steered at the far post from Steven Gerrard’s free-kick, and a volley from distance after he had collected Lloris’s scuffed clearance and glanced up to see the goal gaping. The effort was skewed wide, much to his frustration.

In truth Balotelli had created that chance from nothing, his strength in holding off Younes Kaboul on the halfway line in the build-up hugely impressive, the Italian then turning the centre half and wriggling free and forward. The composure in front of goal will return. Maintain the industry and eagerness to combine with team-mates and Liverpool really have secured a bargain at £16 million.

Spurs could have done with his presence at times, their own rhythm rather disjointed by that early concession, their build-up play too sloppy and glimpses of goal eked out from Liverpudlian possession.

Emmanuel Adebayor lobbed on to the roof of the net from Erik Lamela’s fine pass, though their best opportunity was chiselled out just before the interval when Kaboul’s diagonal pass contrived to split Liverpool’s defence apart.

Dejan Lovren was attracted to Adebayor in the air with the ball flicked on by the forward and collected by Chadli, ignored by Mamadou Sakho. The Belgian’s shot was tipped away by his compatriot, Simon Mignolet, though the goalkeeper should not have been given a chance.

Yet, if that opportunity had at least suggested momentum was with the hosts entering the second period, then Eric Dier’s pull back on Joe Allen just after the interval – the Welshman tumbled eagerly, but the grab was ill-advised – deflated their optimism almost immediately.

Gerrard converted his 43rd penalty for the club and Liverpool were not finished there.

Pochettino flung on Andros Townsend to chase the game but the winger’s first involvement saw him dispossessed by Alberto Moreno inside the visitors’ half, the full back searing up-field with Townsend gasping in his vapour trail. Spurs were floored by the time the Spaniard reached the penalty area, his finish dispatched crisply inside the far post to settle the contest.

Sterling, after a glorious run that left opponents on their knees, should have added a fourth before Danny Rose hobbled away, and presumably out of Roy Hodgson’s England squad, with Spurs winded by the ferocity of it all.

They have business to conclude, with the defensive midfielder Benjamin Stambouli to join from Montpellier and others to depart. The may also seek to secure another forward, with this a wake-up call. For Liverpool, the international break suddenly feels ill-timed.