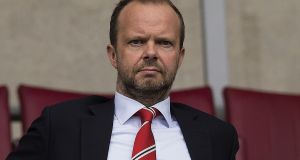 Manchester United’s executive vice-chairman Ed Woodward believes the tech firms will be among the bidders in the next round of Premier League rights sales. Photograph: Jon Super/AFP/Getty Images

The internet giants Amazon and Facebook are likely to bid for Premier League football streaming rights, which will further escalate the huge financial boom for England’s top clubs, the Manchester United vice-chairman has said.

In his quarterly call with bank executives who invest in United’s shares on the New York stock exchange, Ed Woodward said the technology companies were very interested in the last round of rights deals for 2016-19, which the Premier League sold primarily to BSkyB and BT for £8.4 billion (€9.5 billion).

Securing live Premier League rights exclusively in 1992 was key to the very survival and subsequent success of BSkyB, and the game, with its crowds of loyal supporters, remains prime “content” for newer media companies seeking to build businesses on subscriptions.

Last month Amazon outbid Sky, paying a reported £10 million (€11.3 million) a year, for the UK rights to the ATP tennis tour, its first major live sport acquisition outside the US. Woodward noted Amazon now streams NFL action on Thursdays and that Major League Soccer has a deal with Facebook to show 22 games a season, and he told investors Facebook and Amazon had been interested in bidding for the IPL cricket rights.

Asked if he expects the tech giants to bid in the next round of Premier League rights sales, which is expected to open before the end of this year, Woodward said: “Absolutely, I think they will enter the mix; anecdotally, there was incredibly strong interest in the last cycle. We are hearing that around the Premier League table, and we are also hearing that from a European perspective in terms of interest in the Champions League and Europa rights. I do think we are going to see an increasing engagement from these, and we would welcome the interest.”

Woodward announced another year of record income made by United in the last financial year. The 2016-17 accounts for Manchester United plc, which is registered in the Cayman Islands tax haven and floated on the NYSE, showed total income of £581 million (€661 million). That was a £66 million (€75 million) increase on 2015-16, even though United did not compete in the Champions League last season, having failed to qualify under their previous manager Louis van Gaal.

United’s earning power from its global popularity, broadcasting, sponsorships and 76,000 capacity stadium far exceeds that of any other Premier League club; their income of £515 million (€586 million) in 2015-16 was £123 million (€140 million) more than that of the next highest earning club, the Abu Dhabi-owned Manchester City. United’s pre-tax profit last year was £57 million (€64.8 million), while the cost of financing their debts was £25 million (€28.4 million). The club’s borrowings, still dating from the debt-loading takeover by the US-based Glazer family 12 years ago, remain £498 million (€566 million).

Facebook did not comment on whether it will bid for Premier League rights but confirmed it does plan generally to secure live sport on video and their platform Facebook Watch. Amazon had not responded to requests for comment on Woodward’s remarks at the time of going to press. Guardian Service