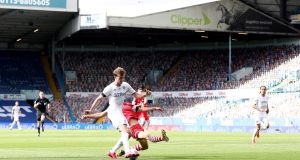 Leeds United’s Patrick Bamford crosses the ball which leads to an own goal scored by Barnsley’s Michael Sollbauer during the Championship match at Elland Road. Photograph: Martin Rickett/PA Wire

Leeds United are so close to the promised land now that they could be a Premier League team again before kicking another ball. This victory leaves them needing just a point to clinch promotion, and though there may be a repeat of last season’s feistiness when they go to Derby on Sunday in search of it, there is every possibility that West Bromwich Albion or Brentford will have blinked first in the meantime.

As it stands Leeds are five points clear with two games remaining, so something cataclysmic will need to happen to prevent a return to the top flight after 16 years, even if there have been false dawns before and Derby and Charlton might not be the opponents Marcelo Bielsa would choose at such a nervy stage of the season.

To Barnsley’s credit no one would have been able to guess this was a top v bottom encounter just by looking at it, though equally the Tykes’ inability to turn some promising opportunities into goals was an indication of why they are staring at relegation.

It was not the most convincing performance – only a first-half own goal separated the sides – though it would still have been cheered to the echo had supporters been present. As with the lost opportunity to pay fitting tribute to Jack Charlton, some of the most significant landmarks in the history of this most raucous of grounds are being passed without any witnesses.

There were first-half chances at both ends before Leeds opened the scoring just before the half hour. A clever ball from Cauley Woodrow released Jacob Brown to give the visitors an early opportunity, but from an impossibly narrow angle the Barnsley forward could only put his shot across the face of goal.

At the other end the influential Mateusz Klich burst into the area from a throw to lay the ball invitingly along the six-yard line, only to find Patrick Bamford was not close enough to take advantage.

Barnsley might have taken the lead from a corner when Mads Andersen put his header narrowly wide, before returning to defensive duties and playing a part in breaking the deadlock.

Again it was a pass from Klich that opened up the Barnsley defence, this time sending Bamford clear in the area, yet just as he was in the act of shooting Andersen arrived with a well-timed block. So far so good, but the ball did not run out of play as Barnsley seemed to expect it to, and Bamford was able to turn it back from the dead ball line towards Helder Costa in front of goal. Michael Sollbauer managed to prevent what would have been a tap-in for the Leeds player, though only at the expense of turning the ball over his own line.

It was a goal that had been coming, however unlucky Barnsley might have felt, for at that point in the game Leeds were on top and making their superiority count. Jack Harrison and Costa in particular looked capable of breaking through at any moment, managing to stretch their opponent’s defence without quite being able to provide a telling final pass.

Leeds have a good record of hanging onto leads, though with only slight better finishing Barnsley might have surprised them at the start of the second half. First Conor Chaplin cut in from the left, shooting early and only missing the target by inches, then Callum Styles drilled a shot the wrong side of a post from a position where he really should have worked the goalkeeper.

Leeds’ attacking options were not helped when Costa had to retire injured either, especially as they had already sent on their impact sub in Pablo Hernandez.

Disdaining his usual stool in favour of squatting on his haunches in the edge of his technical area, Bielsa looked deep in thought as Barnsley won a couple of corner and Sollbauer tested Illan Meslier with a header. The head coach probably did not enjoy the sight of Leeds spurning an opportunity to make the game safe either, Bamford failing to beat Jack Walton from Ezgjan Alioski’s pass with the whole of the goal to aim at.

After that, Leeds spent most of the game back in defence. Not the greatest look against bottom of the table opponents, but needs must at times, and to be fair they did it well. – Guardian