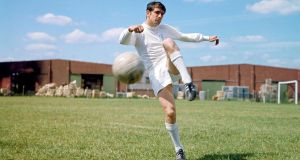 Hunter, who made 28 appearances for the Three Lions and was part of the 1966 World Cup-winning squad, was last week admitted to hospital with coronavirus.

Leeds said in a statement: “Leeds United are devastated to learn of the passing of club legend Norman Hunter at the age of 76.”

The statement on Leeds’ website added: “Norman was taken to hospital last week after being diagnosed with Covid-19 and despite continuing to battle and the best efforts of NHS staff, he sadly lost his fight earlier (on Friday) morning.

“He leaves a huge hole in the Leeds United family, his legacy will never be forgotten and our thoughts are with Norman’s family and friends at this very difficult time.”

Hunter did not play in England’s triumphant World Cup campaign as he could not break the partnership of Jack Charlton and Bobby Moore.

He also played for Bristol City and Barnsley, managing the Tykes after he retired as well as Rotherham.

The EFL tweeted: “We are saddened to learn of the passing of former LUFC, BristolCity and BarnsleyFC defender Norman Hunter at the age of 76. Our thoughts are with his loved ones at this very difficult time.”

A tweet on the England team’s profile said: “We’re extremely saddened to learn of the passing of Norman Hunter at the age of 76.

“Norman was part of our FIFAWorldCup-winning squad and won 28 caps for the #ThreeLions. All of our thoughts are with his family, friends and supporters at this time.”

Former England striker Gary Lineker said: “Sad news: Norman Hunter has passed away. Grew up watching that great LUFC side of which he was a huge part. This awful virus was one crunching tackle too far but he’ll be biting yer legs somewhere. RIP Norman.”

Hunter was the winner of the Professional Footballers’ Association’s inaugural player of the year award in 1974, and the players’ union said: “All at the PFA are deeply saddened to hear of Norman Hunter’s passing.

“Football has lost a legend and we join the entire football community in mourning this loss.”

The Scot, who played alongside Hunter in Leeds’ backline from 1972 until 1976, told talkSPORT: “He was a great player to play alongside. I remember my first game, the team was: four (Billy) Bremner, five McQueen, six Hunter.

“He was a very, very skilful player. He wasn’t just tough-tackling Norman, he was a great player as well, great skill, great ability.

“He was a great human being and a great player.”