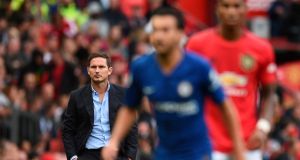 Frank Lampard: “I’m not overly concerned about the games that have gone by. I just want to win the one that’s in front of us.” Photograph: Oli Scarff/AFP Getty Images

Frank Lampard has said VAR appears to be working in Manchester United’s favour at the moment and has warned Chelsea’s defenders to be wary of conceding penalties when they look to end a run of three successive defeats by Ole Gunnar Solskjær’s side in their FA Cup semi-final on Sunday.

United have equalled a record for spot-kicks awarded in a single Premier League campaign after winning 13 this season and Lampard wants his players to avoid diving in at Wembley, pointing out how Bruno Fernandes shaped his body to convince the officials to give him a controversial penalty against Aston Villa earlier this month.

The statistics are not lost on Chelsea’s manager, who believes that United benefited from some questionable VAR calls during their win over Crystal Palace on Tuesday.

Equally, however, Lampard knows his side must be smart when United’s speedy forwards run at them. Although he feels United benefited from some poor refereeing decisions when they won in the league at Stamford Bridge in February, he could not complain about the penalties his defenders gave away when Chelsea lost to Solskjær’s side at Old Trafford in August and in the Carabao Cup in October.

“They have to be careful because when players of such high level, quality and speed of the Manchester United forwards travel quickly you have to move your feet and not dive in,” Lampard said. “That’s an important part of defending at any point in time. But [especially when you understand the qualities of the opposition, with players like that.

“And Fernandes, to be fair, because he’s very clever in his movement. We saw that at Aston Villa to make something feel like a penalty where maybe it even isn’t. The players don’t have to give that. As a player we can talk about VAR decisions and whether they’re right or wrong but if a player is going to dangle a leg and not move their feet then you obviously do leave yourself open to penalties, VAR or no VAR.”

United, who are battling with Chelsea for Champions League qualification, were on the right end of some debatable VAR calls when they moved a point behind Lampard’s side thanks to with their win over Palace. Victor Lindelöf avoided giving a penalty after appearing to foul Wilfried Zaha moments before Marcus Rashford gave United the lead and Palace later had an equaliser ruled out for the tightest of offsides against Jordan Ayew.

“There is always a human element to VAR, still, and clearly they have to make a decision,” Lampard said.

“The confusing thing about some of the recent ones, and the one on Thursday night, is that it’s a very, very clear and obvious decision that was wrong and didn’t get reviewed and changed. A few of those have happened and that is strange. I would like to think that with VAR you have to be level-headed. Some might go against you or not. But we seem to be in a period where, in terms of Manchester United, they’ve got a few in their favour.”

Kurt Zouma gave away a penalty with a trip on Marcus Rashford when Chelsea lost 4-0 at Old Trafford on the opening day of the season and it was Marcos Alonso with a clumsy foul on Daniel James when Solskjær’s side won at Stamford Bridge in the Carabao Cup.

Yet Chelsea, who are still without the hamstrung N’Golo Kanté, fumed after losing at home to United in the league. Harry Maguire remained on the pitch to score a header after escaping a red card when he appeared to kick Michy Batshuayi, while Chelsea saw goals from Zouma and Olivier Giroud ruled out by VAR in the second half.

“It would be nice if VAR worked in our favour in this one, I would guess,” Lampard said. “Fair play, we’ve lost three and that’s just a fact. I’m not into revenge. I just want to win the game on Sunday and against a very good team.

“It was very much a changed team in the Carabao Cup and I still felt we were the better team, but you lose. Then in the league we had a good first half, missed opportunities and they take theirs. You have to respect the fact they are a good team and we can all see that in their recent form, but I’m not overly concerned about the games that have gone by. I just want to win the one that’s in front of us.”

Dean George bags a hat-trick as Athlone stun Shels 19:27
England lay down marker for Ireland after bonus point win in Rome 19:09
Dublin return from the dead to give Kilkenny a scare in Croke Park thriller 18:57
James McClean nets for Stoke as they beat Rotherham 18:35
Impressive Waterford power past Cork to reach Munster final 18:20