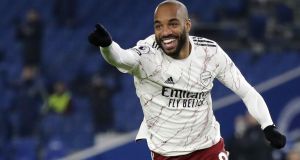 Arsenal’s Alexandre Lacazette celebrates after scoring the opening goal during the Premier League match against Brighton at the Amex Stadium. Photograph: Frank Augstein/EPA

Substitute Alexandre Lacazette made an instant impact as Arsenal continued their resurgence by scraping a 1-0 win which prolonged Brighton’s miserable home record.

The Frenchman’s decisive 66th-minute strike made it back-to-back wins for the Gunners to move them nine points clear of the relegation zone and further ease mounting pressure on head coach Mikel Arteta.

Beleaguered Brighton remain just two points above the drop zone after failing to end their lengthy wait for a victory at the Amex Stadium.

The Seagulls, who lacked a cutting edge throughout, end 2020 with a solitary home win from 17 top-flight fixtures and with plenty of work to do in the new year.

Arsenal arrived on the south coast as the only team to have lost a league match here during the past 12 months following a 2-1 reverse in June but buoyed by the overdue 3-1 win over Chelsea on St Stephen’s Day.

Leeds ran riot at West Brom to hammer the Baggies 5-0 and claim their biggest Premier League win for 17 years.

A first-half blitz from the visitors blew Albion away to leave Sam Allardyce looking for his first win as boss.

Romaine Sawyers’s awful own goal set the tone for the hosts before quickfire first-half goals from Ezgjan Alioski, Jack Harrison and Rodrigo.

Raphinha also netted in the second half as Leeds recorded their biggest victory in the top flight since a 6-1 win over Charlton in 2003.

Marcelo Bielsa’s side kept back-to-back clean sheets for the first time this season to climb to 11th.

Leeds have taken strides forward, using their risk and reward philosophy, and they demolished a Baggies side who were promoted to the Premier League with them last season.

The teams are going in opposite directions as Leeds’ rollercoaster season continues, while second-bottom Albion are already facing an instant return to the Sky Bet Championship.

They rolled the dice and appointed Allardyce after sacking Slaven Bilic this month and Sunday’s impressive point at Liverpool suggested the new manager’s methods had already sunk in.

But his side capitulated at home on Tuesday – not for the first time this season – and they have conceded 13 goals in their last three home games to sit five points from safety.

Ben Mee gave Burnley a concrete reason to celebrate amid reports of the club’s imminent American takeover as his goal sent relegation favourites Sheffield United into the new year winless in the Premier League.

With sports investment firm ALK said to be on the verge of assuming control of the Clarets, Mee’s first-half header paved the way for a 1-0 win and a result that provides Sean Dyche’s side with a vital buffer over the bottom three.

News of a coronavirus outbreak at United had briefly raised question marks over the viability of the fixture – with boss Chris Wilder only able to name seven substitutes after two players and “four or five” backroom staff returned positive tests.

Wilder was still able to make only one change from his previous starting XI and confirmed before kick-off that he was not in favour of the game being postponed. But with two spaces unfilled on a bench that did not include Phil Jagielka or Billy Sharp, any further developments among the squad would surely spell trouble.

As it stands the South Yorkshiremen sit with a meagre haul of two points from 16 games, the first top-flight team without a victory at this point on the calendar since Bolton in 1902-03.

Having already slipped out of the European places following a hard-fought draw at Fulham on St Stephen’s Day, Southampton were unable to bounce back in the absence of manager Ralph Hasenhüttl, who is in self-isolation after a member of his household tested positive for Covid-19.

David Moyes brought on Said Benrahma, Jarrod Bowen and Michail Antonio in the second half in an attempt to find a way through the home defence, but despite some late pressure they were unable to make the breakthrough.

The result leaves the Saints in ninth but level on points with fifth-placed Aston Villa.