Tuchel had overseen 4-0 win over Racing Strasbourg on Wednesday 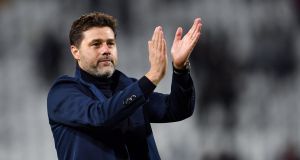 Mauricio Pochettino is set to replace Thomas Tuchel as Paris Saint-Germain’s head coach in the coming hours, after the German was sacked on Thursday, with the club that have been champions seven of the past eight seasons sitting third in Ligue 1.

PSG’s sporting director, Leonardo, has made contact with Pochettino’s representatives and talks are taking place, with an agreement expected in the next 24 hours. The Argentinian, who has been out of football since leaving Tottenham in November 2019, is thought to be very keen on taking over at the Qatar-owned club.

Tuchel has paid the price for a slow start in Ligue 1, where PSG have four defeats in their first 17 games and are a point behind Lyon – the leaders – and Lille. The 47-year-old departs after a 4-0 home win over Strasbourg on Wednesday that suggested the French champions were finding top gear again.

In his post-match press conference on Wednesday, Tuchel addressed comments made in an interview with German TV channel Sport1. Tuchel was quoted as saying he felt more like “a sports politician than a coach” in his first year at PSG, but insisted that the quote was an inaccurate translation of a light-hearted comment.