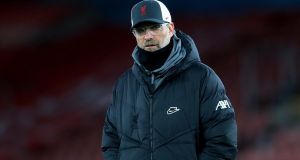 Liverpool manager Jurgen Klopp: ‘I am not a five-year-old kid any more and if I don’t get what I want I start crying.’ Photograph: Adam Davy/PA Wire

Jürgen Klopp has declared he will not cry like a five-year-old at Liverpool’s inability to sign the centre back he would ideally want in the last 10 days of the transfer window.

Klopp, who has paired the midfielders Fabinho and Jordan Henderson in the middle of his defence recently, has conceded he would prefer to get reinforcements to cover for the injured Virgil van Dijk and Joe Gomez and in the frequent absences of Joël Matip.

But the financial effects of the coronavirus pandemic have limited Liverpool’s spending power and Klopp is adamant he will neither throw a childish tantrum nor use it as an excuse for their recent slide.

“I am not a five-year-old kid any more and if I don’t get what I want I start crying,” he said. “Most of the time in my life I didn’t get what I want, to be honest, so we are all pretty much used to that. I am responsible for a big part of this football club but there are people who are responsible for the whole thing and I cannot make their decision. I know they are with us and I know they want to support us and they do.

“What we have to do is improve the football in the decisive areas with this squad. That’s my job, and not sitting here and being disappointed or frustrated with some decisions. I am not. Of course, we know what we would do in an ideal world but the world is not ideal and not only for us. So we have to deal with the situation.”

Liverpool are on their longest Premier League drought in 21 years after failing to find the net in 438 minutes, but Klopp refused to attribute the lack of goals to the makeshift look of his side as he said that their troubled January has not altered their plans for the remainder of the window. He still has not replaced Dejan Lovren, who joined Zenit St Petersburg in July.

“Now we talk about a centre half. Yes, it would help: 100 per cent. Would we score more goals with a centre half? I am not sure. Would it give us a little bit more stability in specific moments? Yes, probably. But we don’t go and say: ‘If we don’t get this or that, then we cannot perform.’ It would sound like an excuse, and the last thing we are looking for is that.”

He denied complacency had been a factor in Liverpool’s decline: “It is not that in the moment we win the league and I put my feet on the desk and think that’s it and smoke a cigar and think: ‘Well done, from now on everything will work without any doing of mine.’”

Ole Gunnar Solskjaer will rotate his squad when Manchester United resume battle with Liverpool on Sunday in the FA Cup, with the Norwegian hoping history repeats itself having made a key impact in the same fixture in 1999.

Having only last weekend met for the first time in a year, that tense 0-0 Premier League draw at Anfield will be swiftly followed by a fourth-round clash at an empty Old Trafford this Sunday.

Solskjaer plans to lean on his squad players in the FA Cup, which provides the 1999 treble hero with another shot at his first trophy in the dugout.

“We’ll rotate, that’s for sure,” Solskjaer said. “We’ll put a decent team together of course, a team I feel can win the game. Of course you want to get your hands on that first trophy, but it’s always the league position that’s the measure of how far you have come.