Minor operation will sideline striker for a number of weeks 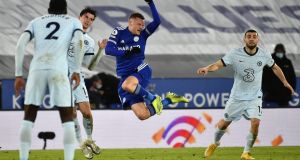 Leicester City striker Jamie Vardy is to undergo hernia surgery and will be out for a number of weeks. Photograph: Rui Vieira/AFP via Getty Images

Leicester striker Jamie Vardy is out for a number of weeks as he needs surgery on his hernia. He has been battling the problem for months and the decision has been made for him to go under the knife.

He will face a race to be fit for the visit of Liverpool on February 13th but Foxes boss Brendan Rodgers hopes the ex-England hitman will make a swift recovery.

He said: “Jamie will be out for a few weeks, we have been managing him over the last number of months. He has been absolutely fabulous.

“We have a window now to have a minor operation on his hernia and he will be back in a few weeks.

“It’s one which doesn’t keep him out for too long, it’s just a repair in and around the hernia area. It’s one we feel he can’t put off much longer.

“We were hoping to do it a few weeks back but it’s a window where we can now and it will leave him with a good part of the season to be really influential for us.”

Leicester go to Brentford in the FA Cup fourth round on Sunday also without Dennis Praet (thigh) and Wes Morgan.

Vardy has not scored in five games but the Foxes have still won three and drawn twice and Rodgers expects them to perform without the 13-goal man.

He said: “We have played without Jamie before and scored goals and won games. He is a very important player for us, in the last few games he hasn’t scored but has contributed to the team and others have scored.

“When you don’t have one of the top strikers in the league available it’s disappointing but we have always tried to rely on the collective.

“It’s not overly concerning but it’s our best chance of getting him back.”