Klopp: comeback against Barcelona ‘worth more than silverware’ 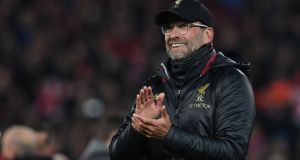 Jürgen Klopp has said Liverpool’s Champions League comeback against Barcelona was worth more than silverware, and his team have produced a season to savour regardless of who wins the Premier League.

The Liverpool manager will deliver the club’s first league title for 29 years on Sunday should his team defeat Wolves at Anfield and Manchester City fail to win at Brighton. They can also become champions of Europe for a sixth time on June 1st with victory over Tottenham in Madrid.

Klopp’s wait for a first trophy as Liverpool manager will continue even with 97 points, however, should Pep Guardiola’s champions win a 14th consecutive league game. But, while insisting Liverpool will fight to the last second to win the Premier League, Klopp maintains a season of consistent quality with incredible highs such as Barcelona will not be undermined by City retaining the title.

“It’s really not about me, it’s really about the club,” the Liverpool manager said when asked about winning his first trophy at Anfield. “We all have to make the best of the circumstances that we have. That’s what we try. If that leads to silverware then wonderful, but we cannot do more. If people judge me on not winning something in the past or winning something in the future, I cannot change that. All I can do is my best and I am 100 per cent sure I do my best. It’s not perfect, because it’s me, but I cannot do more.

“This season has been a year full of wonderful moments together. Looking forward to games, enjoying games and last Tuesday was the icing on the cake so far. Wow. That’s exactly the picture we want to draw for the outside world: this is Liverpool, it’s possible here, it’s possible in this club and in this city with the people around. That’s the picture. A moment like this is worth more than silverware.

“The job is to develop as far and as high as possible so it gets more and more likely that you win silverware, and that’s what we’ve done so far. Now we go to a final and we’ll play it, learn from the past few years and see what we can do there. Sunday is our last Premier League game. It’s not in our hands what we get but it doesn’t make our season a little bit less good. It’s just a different finish.”

Klopp said he does not need “any more hope or belief than I already have” for the final day and that Liverpool’s focus has only to be on defeating a dangerous Wolves team. The hosts collected several injuries during the semi-final comeback against the Spanish champions, but Klopp said the message from a defiant dressing room was: “It’s only pain.”

He added: “Strange things can happen. The ball still has to go in. Our last game [at Newcastle] was decided with a header from a free-kick. There is a bunch of players around and one head is in the right spot and thank God it is one of ours. Wolves can score, Brighton can score and then everyone has to deal with the situation.

The Liverpool manager described the Champions League final as a meeting of the “two teams who showed the biggest heart in the whole competition”, but was critical of the exorbitant prices fans are being charged in Madrid and of Uefa’s “irresponsible” choice of locations for finals.

Klopp said: “With Madrid it’s unbelievably expensive, but it’s not another part of the world at least. Going to Baku for a Europa League final is really funny. The guys who make the decisions, I don’t know what they have for breakfast. These decisions must be much more sensible and reasonable. It looks irresponsible.”

The timing of the Nations League finals also attracted the ire of Klopp.

“On the 1st June we play a Champions League final and on the 6th there is a wonderful tournament called the Nations Cup,” he said, sarcastically. “Everybody looked at me when I said it was not such a good idea and, whoops, there are two teams in the final who are English. If we don’t learn to deal with our players in a better way, competition-wise, it’s the only chance to kill this wonderful game. Because without the players, it’s not a good one.”